Khmer expatriate Sophoan Seng, a master’s degree holder in political science from the University of Hawaii at Manoa, currently Director of KEEN Investment Groups LTD and president of the Khmer Youth Association of Alberta, acknowledges that many people in Cambodia endorse the “filled stomach and stability” theory for different reasons.
“However,” Seng, a former Buddhist monk in Siemreap for more than a decade, writes, “Buddhists who have learned and experienced deep understanding of Buddha’s teachings, see that the highest goal of Buddhism is ‘liberty’, not the ‘four necessities’,” i.e., food, shelter, clothing, medicine.

His ideas are similar to those of another former monk, Heng Monychenda, who holds a master’s degree from Harvard and heads the nonprofit group, Buddhism for Development. Seng points to Buddha’s teaching that “liberty” or “Nama,” — referring to a person’s mind or spirit — and the “four necessities,” or “Rupa,” — referring to body or physical appearances — must be equalized and balanced. As Monychenda explains, “Nama-Rupa” means that mind and matter must go together. “Mind affects matter and matter affects the mind,” i.e., spiritual and economic development should not be separated into two separate realms, he says. 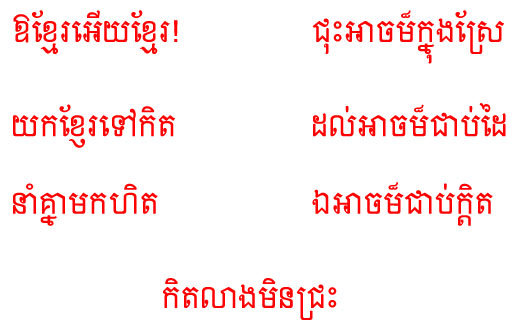 Something is changing within the Khmer nation.
Those storied Khmer characteristics – the broad smile; the gentle, peaceful compassionate nature – and the centuries-old traditions of “korup, bamreur, karpier, smoh trang” — “respect, serve, defend, be loyal (to leaders)” — passed down through generations seem to be taking a new course.
A photo floating on the Internet shows Khmer villagers–from youth to middle age–standing barefoot under the hot sun as their colorful sandals are arranged in an empty lot nearby to make up the Khmer word “Aphivath,” or “Development.” Their symbolic protest is directed at Khmer leaders and at those around the world who are sympathetic to the disenfranchisement of the poor in contemporary Cambodia.
Photos and videos of government abuse of citizens’ rights and of citizens’ responses have inundated the Internet. Some postings inform and educate. I recommend recent postings on the Website of Radio Free Asia (February 1, “More Arrests Follow Land Clash“).

The beatings of women and children by riot police are routine — and are routinely condemned by international and national rights groups. The too common sight of Khmer women with clothes torn or ripped off by police during peaceful protests is now replaced by the sight of women protesters taking off their clothes to highlight their protests as they face the police.

Going one step further, RFA posted on its website a photograph of a half-naked Khmer woman protester facing police in full riot gear. Her action was intended to highlight the plight of Cambodian villagers from the Borei Keila community, who were evicted by armed police from their homes, which were dismantled and the co-opted land given to Phan Imex Company for commercial development.

Khmer women taking off their clothes in public to protest against authority is a new phenomenon. But, it shows something else too: Submission to injustice has a limit, and “fear,” a conditioned behavior, is being overcome.

This new behavior takes me back to an e-mail from Phnom Penh from forty-something Sambath, a graduate in political science from a University abroad, who told me unreservedly several months ago that today’s young Cambodians have become “fearless” to confront what they perceive as unjust. Sambath also said something I had not heard before: Cambodians in their mid-fifties and older are too conservative and too prudent to be helpful in the fight against dictatorship.
Sambath’s view was repeated by Teveakor, also in his forties, who holds a master’s degree from a Cambodian university. He sees Cambodians in their mid-fifties and older as a “conservative force” while young democrats need a “push force.” Teveakor claimed that he and colleagues, young democracy advocates, are struggling in the midst of their families’ poor economic situation to work on strategic planning, building and strengthening a leadership circle among younger Cambodians, and spreading political awareness amongst Cambodians they know.
Meanwhile Makara, also in his forties, told me bluntly from Phnom Penh that “writing, speaking, denouncing, suing” don’t bring down the current dictatorship. He presented a rather imaginative Machiavellian “cool technique” he thinks would shake the core of the autocratic rule — “smart thinking” if I may say so, though I will not repeat his ideas here. As Burmese icon Aung San Suu Kyi said, “Action comes out of thought.”
Their emails remind me of a former comrade-in-arms during my service with the Khmer Non-Communist Resistance, a high ranking royalist, who wrote about the “silent majority” that is hard at work.
A reader in Phnom Penh whom I never met, answered my question on the situation in Cambodia as he sees it by sending me the link to the June 2007 Global Witness Report titled, “Cambodia’s Family Trees, Illegal logging and the stripping of public assets by Cambodia’s elite,” and the link to a Human Rights Watch publication on forced evictions, with his own comment: “This says it all.”
A collision course theory
An older Khmer, Lokta Mekso, is concerned that Cambodia is headed toward a “bloody revolution” if there’s no change to the status quo. He theorizes that as Cambodians, “distressed” by the economic situation and the incessant violations of rights and freedom, release their frustrations against the regime in power, the latter will respond with increased repression. The stress-repression process is likely to spiral into an “explosion” a la Arab Spring — with inevitable bloodshed, he believes.
“There would be no change through a peaceful way,” Mekso thinks. He is frustrated that the regime has declined to alter the policies and actions that increasingly stress the population and propel them toward confrontation with authorities.

I have tried to capture the stress-repression spiral Lokta described. I selected photos available in the public domain, made slideshows, and posted them on YouTube — the last one posted two weeks ago. Indeed, I can anticipate the future bloodshed Mekso fears. In his analysis, this continued stress-repression spiral shall cost the “stressors” their hold to power in five to 10 years.

This brings me to Khmers’ Thnenh Chey, a hero in Khmer folklore who seems to never run out of ideas. When the King forbade Chey to show his face during a royal procession, Chey drew a human face on his derriere and exposed it for the King to see. Brought before the angry King, Chey swears his undying respect, that he would never violate the King’s order not to show his face, nor would he be so disrespectful and disloyal as not to be present at so revered a royal procession.

http://www.youtube.com/watch?v=VhM4bZToPwM
In another episode, arrested and transported by boat by the King’s soldiers, Chey knew his day was coming to an end, so he launched his own “psy-op”: He explained to the soldiers that he would be executed anyway so told them to let him drown and die, why bother to transport him all the way to the palace. He persuaded the soldiers to let him fall into the water, and they should shout “A Chey thleak toek” (“Chey falls into the water”) and then cheer “Hai eur, Hai eur!” (Hallelujah, hallelujah!). Chey’s psychological operation worked. He dropped into the water and swam away as the King’s soldiers cheered.
Nonviolent action does not mean inciting the people to rise up against the oppressors who spray bullets. As in jiu-jitsu, a martial art that uses the attacker’s weapon against himself or herself, political jiu-jitsu is a technique using the dictator’s best weapon, violent repression, against himself or herself.
Nonviolent action specialists remind us that just as the dictator stays in power because he has pillars of support and the people he governs obey him, the democracy actionists’ job is to pull away (not destroy) those pillars of support (bureaucracy, police, military, etc.), and persuade the people to withdraw their obedience. Cambodian democracy activists can learn much from Thenh Chey, the prince of thinking smart and acting smart.
In the final analysis, it is Cambodians who decide what their country’s destiny shall be. As I said time and again, I write to share what I know, if it helps, that’s good; if not, you would at least have read and learned something from what I write. As Confucius says, “You cannot open a book without learning something.” Of course, you can open a book and not read.
The old adage, “We get the government we deserve” means that it is citizens’ action (Cambodians’ election) or inaction (Cambodians’ large zone of indifference) that brings to the seat of power the leadership that rules over them. It is earned by the citizens.
Nonviolent action is a technique for Cambodians to consider. It is said one who does not risk anything gains nothing. The alternative is continued oppression.
As we are 46 days into this New Year 2012, I wish all Cambodian democracy activists and actionists success on whatever road they take toward the country’s future.
Remember Lord Gautama Buddha’s words of 2,500 years ago: “No one saves us but ourselves. No one can and no one may”; “I do not believe in a fate that falls on men however they act; but I do believe in a fate that falls on them unless they act.”
—————————————————————
The views shared in this article do not necessarily reflect those of the AHRC, and the AHRC takes no responsibility for them.

About the Author:
Dr. Gaffar Peang-Meth is retired from the University of Guam, where he taught political science for 13 years. He currently lives in the United States. He can be contacted at peangmeth@gmail.com.

Visit our new website with more features at www.humanrights.asia.

You can make a difference. Please support our work and make a donation here.

Please consider the environment before printing this email.
Spread the love