After Kem Sokha was silenced through jail, Sam Rainsy has spoken loud abroad, and the current in-flooded attention of the world is truly a sign to the survival of their party. Now, it is Kem Sokha’s turn to add more scores to what Sam Rainsy has achieved. Kem Sokha could be active and effective domestically and Sam Rainsy is internationally. At the moment, if either Kem Sokha or Sam Rainsy don’t speak out loud, the future of these dual shall be disappeared from Cambodia arena.

Furthering a note by Prof. Ear Sophal, I would like to through in some pieces of thought into this matter.

Now, it is wrong time, wrong space, and wrong situation: SRP & SRP has already melt into CRNP. And Kem Sokha and Sam Rainsy have not been fighting to take one seat but to supplement each other of that one seat into reality. HS is facing backfire and deadlock in his cocking fighting or cheeseboard tactic. More he is playing such game more losing of his own popular support and legitimacy. From lesson learnt: Funcipec and so on, all democrats have learnt tremendously on how to bond, to strive and to celebrate their victory. Now, Rainsy is welcome and empowered by Answer’s Government, next, both CNRP and Pakatan Harapan shall celebrate together!

Posted in Researches | Comments Off on Kem Sokha has remained under arrest with new court conditions in a politically motivated charge
Tags: CNRP, Sam Rainsy and Kem Sokha 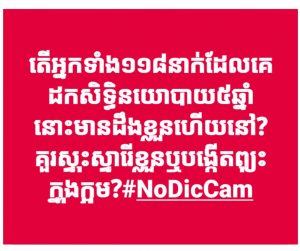 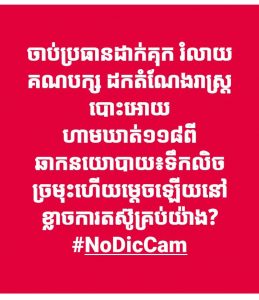 END_OF_DOCUMENT_TOKEN_TO_BE_REPLACED

After a single party of government-led party CPP decisively amended the latest laws on political party, Hun Sen has already gained his “upper hand” to fit his “game changer” of win-win strategy to defeat his contender (CNRP) before the elections arrived. Hun Sen has conducted whatsoever he could to gain upper hand: to manipulate the durable national institutions into his personalized institutions, to uphold his patronage networks by monopolizing national wealth, and to tame Cambodian people by using the politics of fear and partial court. The national constitution has been wrongly trimmed to maximize his upper-hand approach at all cost.

Will CNRP be dissolved by the amended laws?

The amended laws are just the back-up plan to advocate party defectors. Primarily, Hun Sen frightened the voters by declaring war if his party lost in the election. But such action will place him at the worst risk. This time, the amended laws with the lawsuit filing at the supreme court to dissolve the CNRP will place him at the worst risk as well if it is put into action. Then, the new dating of Senate election to February 25, 2018, has entertained his intuitive belief in dividing and weakening the CNRP.

Hun Sen is facing with the power of common sense

Hun Sen might be good at the actual battle field, but his latest tactic under the growing well-informed citizens of Cambodia and within the democratic ballots field, he has already succumbed to self-defeat by distancing himself from “people’s common sense”. Those tactics against the people’s common senses are following: working “to cut head to fit hat” in applying the laws of the empire, manipulating the garment workers, dumping the voters by welcoming or advocating defecting representations (law-maker and Sangkat/commune council) to his party, violating the international treaties, and throat-cutting approach towards Cambodia’s growing economy by confronting with the EU and America.

Hun Sen is at high risk

Different from coup-detat in 1997, Hun Sen has run out effective means to attract international community to believe in his “game changer” supremacy. This time, CNRP and their leaders will not continue to commit self-suicidal by accepting any condition to become an alibi, or a power etiquette for the power holder, or bringing national fate into so-called national reconciliation. CNRP and their leaders didn’t shed a fire, thus those who shed fire must be accountable. If Kem Sokha is not released, and the CNRP will be dissolved on November 12, 2017 accordingly, those CNRP law-makers and Sangkat/commune councils are still there because they are elected by the people, and the CNRP and their supporters have more leverage to appeal to the UNs, the signatory countries of the Paris Peace Agreement, and the international community, to step in so that Senate election in February 25, 2018 and the national election in July 29, 2018, are meaningful. More than this, when CNRP is dissolved, there will be no government. No other country in this world dare to recognize such “illegitimate” group of power brokers. As said, the international community will encourage the King to play his role to declare the dissolution of the national assembly paving way to conduct an election for a new “legitimate” government.

The supporters of CPP have likely lost sight to uphold the principles while a “game changer” has already achieved his “upper hand” vision. But those supporters are remained intact to challenge a “game changer” to exercise such game easily. The 55 law-makers of CNRP must work in team with achievable plans to outreach to all democratic countries, the UNs, and the international community both domestic and abroad. The 5007 Sangkat/commune councils are active to daily engage with neighbours and those in need at the grassroots levels. The CNRP must uphold “consensus” work procedures of decision-making as supremacy within the party without granting power to any individual in decision-making so that they will face with political of fears and threat. The mandated November 9, 2017, by the America will be effectively taken action. The EU’s economy sanctions announced on Tuesday, October 31, 2017, has been clear enough. Many private talks and measures by the concerned countries have been already put in place. China’s advisers of central communist party’s Politburo already wrote on its media outlet in warning the risky move of Hun Sen if he dare to dissolve the CNRP.