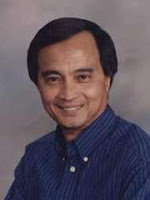 Ngarm never really lost hope. Following the October 1991 Paris Peace Accords, Ngarm, 28, left the refugee camp in 1992, headed to Ksach Poy, which he remembered fondly as a beautiful place with peaceful and “warm-hearted” people. There Ngarm saw beauty. And he saw young people. Ngarm saw a role for himself.

In 1994, Ngarm and some committed, perhaps idealistic, colleagues founded the “Friends Economic Development Association,” or FEDA, with a purpose to help the villagers to help themselves and to build a community that is “strong, inter-dependent and self-reliant.”

Fast forward. Ngarm is now 45 and I am 64, but destiny had us meet again, this time in cyberspace. Ngarm is executive director of FEDA, a registered non-governmental organization. He holds a master’s degree in peace studies from England’s Bradford University, and is also executive director of the Alliance for Conflict Transformation, or ACT.

Ngarm has sprouted his wings: He’s a community organizer and a peace worker.

Cheang Sokha, executive director of the Youth Resource Development Program (www.yrdp.org), a promoter of critical and analytical thinking, peace studies and conflict resolution — a topic worth examining — also is a core member of ACT.

So, what has become of Ksach Poy today?

You can Google “FEDA Cambodia” and watch a nine-minute video on YouTube about the 3,000 inhabitants (the majority are young people) who are rice farmers at Ksach Poy, with “no running water or electricity.” Families with an average household income of about 30 dollars a month, grow fruit, run small enterprises — trading stalls and “taxi” services to town — to supplement their income from rice sales.

FEDA says many of the children of Ksach Poy suffer from malnutrition; basic medical facilities are lacking. While most of the 300 children between 6 and 18 years old finished primary school in the village, many must help their families in the rice fields or at home and cannot attend secondary school.

Listing as its mission to “help alleviate poverty” of villagers in Wat Kor Commune in Cambodia’s northwest, “by developing self-sustaining income generation projects, and by providing children with educational opportunities (to become) responsible citizens,” locally, nationally and globally, FEDA describes its vision as striving “to build a prosperous and peaceful society where opportunities for education, viable work and healthy social relationships are accessible to all people without discrimination (and) focuses on working with young people to build positive and peaceful attitudes in their communities.”

Its “core values” are “creativity, empathy, non-violence, non-alignment with government, political independence, and non-discrimination.” It aims for “transparency, accountability and sustainability” in its actions.

In 1997, FEDA curbed migration of rural women to urban areas and kept local resources local by creating a garment production facility to enable women to earn a living and bring in the money that benefits local markets and village businesses.

An “alcohol and drug-free … Green Orange Café” — named after the renowned Battambang orange — allows young and old to meet and socialize, provides employment and raises money for other projects. The Café uses only local ingredients.

FEDA’s “free community/youth center,” called the “House of Light and Knowledge,” now has more than 800 students who learn English, environmental and peace studies, art, music, sports and vocational skills. It has classrooms, an office, computer lab, library, music room, sports facilities and playgrounds. FEDA says that this “already successful venture could well be replicated in other parts of Cambodia as funds permit.”

The Hun Sen government should pour money to support and replicate the project. “The project hopes to contribute to rebuilding the country’s social fabric,” FEDA states. Amen!

Ngarm has contributed to humanity. He began with “almost no hope.” But he developed ideas, and he put ideas into practice. That’s how he and his colleagues have brought about change!

Ngarm’s inspiring efforts and determination to do something for the common good are an example to us all.

A. Gaffar Peang-Meth, Ph.D., is retired from the University of Guam, where he taught political science for 16 years. Write him at peangmeth@yahoo.com.

Spread the love
Posted in Economics, Education, Social | Comments Off on Successful NGO should be replicated
Tags: NGOs in Cambodia, social participation


« Journey equality far from over
Stigma on Judicial Reform in Cambodia »