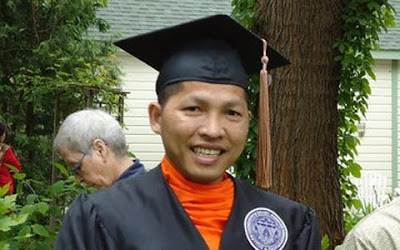 Hoeurn Somnieng is the founder and executive director of a junior high school, a boarding house for girls, a vocational training program, an orphanage and the Life and Hope Association.

The Life and Hope Association is the umbrella organization for his school, partially funded by foreign aid programs in the US, Australia and Germany. The program pays for student transportation and meals and supplements salaries of government teachers.

The association also works to improve the lives of disadvantaged Cambodians, particularly children and women, through education, vocational training, and health services. Many of those students who attend the school are victims of domestic abuse, orphans or street children. Many of them live in misery; some are trapped in the sex trade.

Hoeurn Somnieng heads the NGO Network in Siem Reap, as well as the Chamber of Social Service Network Against Child Labor. He is a program director for the Salvation Center Cambodia, where he worked on HIV and AIDS, including as a provincial monk core trainer on the disease and drug prevention.

What has all this taught him?

“You can change your future,” he said. “Bring hope into your life and keep working hard. Your future will be bright.”

He’s even developed a mathematical formula. “Life plus hope equals change,” he said. “And life plus hope plus education equals a great change.”

John Hawry, who teaches at the nursing department of Black Hawk College and is a colleague of Hoeurn Somnieng, said the monk remains dedicated to his country and has as strong work ethic.

He “helped establish a small shrine for the Buddhist community that lived around us,” Hawry said. “We have many people that migrated from Vietnam, Thailand, Cambodia and Laos that lived in our town, so that was the first time that they had a shrine.”

“It was a very profound experience for me,” he said. “In a period of great suffering, I was kind of not knowing what to do, and I just sat and closed my eyes and focused on my breathing.”

Another support of the monk’s work, Vivian Norton, said she organized a fundraiser for enough money to purchase 12 tons of rice—about a year’s supply—for the Life and Hope Association.

“I went to Cambodia three and a half years ago at a volunteer center that Venerable Somnieng established for young girls,” Norton said. “I met him at the sewing center and saw he had a project that worked and found him to be a very effective administrator for the project. But at the same time he certainly stands by Buddhist principles, and he is very devoted to his project and to his people.”