Alberta is well known as a leading exporter of natural resources like timber and oil in Canada. Large foreign companies from the US have invested billions of dollars extracting oil and gas in this territory to make up for the shortage of oil for energy in their country. Oil deposits which are called “oil sands” are very distinctive from what is found in those oil rich countries such as Iran or Saudi Arabia in the Middle East, and the monitoring and regulations of this lucrative industry has never been neglected.

The official website of the Alberta government describes Alberta’s oil sands as the backbone of the Canadian and the global economy, adding it is a great buried energy treasure which has continuously supplied stable and reliable energy to the world. Oil sands are a naturally composed mixture of sand, clay or other minerals, including water and bitumen, which is a heavy and extremely thick, sticky oil that must be treated before it can be processed by refineries to produce usable fuels such as regular gasoline and diesel. Oil sands can be found in many locations around the globe, but the Athabasca deposit in Alberta is the largest and most developed and it has utilised the most advanced technology to produce oil.

Canada’s Facts and Statistics Department has ranked Alberta’s oil sands second after Saudi Arabia in terms of proven global crude oil reserves. In 2009, the total proven oil reserves were 171.3 billion barrels, or about 13 percent of the total global oil reserves, which is about 1,354 billion barrels. The net income in the fiscal year of 2009 for the Alberta government was more than US$3 billion in royalties from oil sands projects, which was lower than 2008 at $20.7 billion. But they project it to skyrocket and revenue to hit $15 billion in the next few years. Ultimately, about 99 percent of Alberta’s oil comes from oil sands.
END_OF_DOCUMENT_TOKEN_TO_BE_REPLACED

On Thursday, Cambodia submitted a request to the International Court of Justice for an interpretation of its ruling on the Preah Vihear temple. 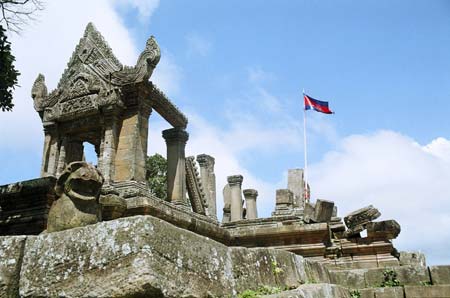 As clashes with Thailand entered an eight day, Cambodia announced its submission to the ICJ regarding its 1962 decision to award it the 11th-century Hindu temple. Despite the almost fifty year old ruling, the problem over the ownership of a 4.6-square-km plot of scrub land surrounding the ruins has never been resolved, with both countries lay claim to the disputed area. The structure – one of the most celebrated example of Khmer architecture – has been the focus of strained relations between the neighbouring states, particularly since tensions it was granted UN World Heritage status in 2008.

The Ministry of Foreign Affairs and International Cooperation of Cambodia stated that the submission of the request was prompted by “Thailand’s repeated armed aggression to exert its claims to Cambodian territory, on the basis of its own unilateral map that has no legal basis”. It added that Cambodia also submitted a request to the ICJ to take conservatory measures, “in light of the repeated acts of aggression against Cambodian territory by Thailand’s armed forces”. “Cambodia considers conservatory measures as unavoidable for engendering a permanent ceasefire between the two countries, thus stopping the loss of lives and preserving the temple of Preah Vihear from serious damages, until the interpretation of the ICJ’ s 1962 judgment is finalised,” said the statement. A clarification by the court was of “the utmost necessity… in order to peacefully and definitely settle the boundary problem between the two countries in the area”.

Foreign ministry spokesman Koy Kuong stated “We especially want clarification about the vicinity around the temple. Thailand is using unilateral maps to claim our territory.”