Email from Canada, Freedom and the challenges of teen pregnancy in Canada 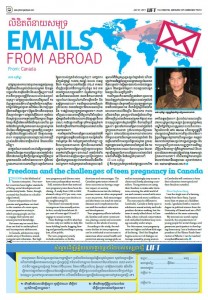 FREEDOM is the lifeblood of human enterprise.  Free-market countries have higher standards of living, social development and productivity levels.  Some, though, contend that freedom is a double-edged sword.

Greater independence from parents and guardians can lead to the creation of a more open, more progressive society in which young people are free to engage their talents and amass practical knowledge.

But some say too much freedom can lead to undisciplined and incompetent adolescents.

In Canada, adolescents enjoy a wide array of freedoms, sexual, romantic and otherwise.  But high teen pregnancy and divorce rates have some policymakers worried.

Still, statistics show that national teen pregnancy rates have been declining.  A study from 1996 to 2006 showed a drop of 37 per cent, compared with a 25 per cent decline in the neighbouring US.

This doesn’t necessarily mean  teenagers are less sexually active.  In fact, a study found about 50      per cent of teens aged 16 and 17 engage in sexual activity.

These findings confirm what has become only too visible in daily life: teens holding hands, hugging, kissing and generally revelling in young love, all in public.

The teen-pregnancy study includes statistics on births, abortions and miscarriages.  The Canadian government views all three outcomes as having a negative impact on society.

If newborns survive the delivery process, teens are often unprepared to act as parents.  And miscarriages and abortions can result in various diseases and complications that can stall the mother’s education and development.

Teen pregnancy affects individuals, families and entire communities, placing a social and economic burden on the whole of society.

According to the study, the welcome decline in teen pregnancy can be attributed to an increase in awareness about sexual health and protection among teenage girls, as well as increasingly easy access to clinics and family planning counsellors.  Young women are using their freedom to make safer decis-ions, entering the adult world of sex and romance armed with more information and more confidence.

The story may be different in Cambodia.  Canada is fairly open to adolescent sexual activity and independent decision-making, but the issue is rarely talked about in Cambodia, where cultural conservatism and embedded tradition keep teenage sexuality under wraps.

For this reason, teen pregnancy rates are higher and show little sign of declining.  Until the Kingdom begins some sort of dialogue on teenage sexuality, young women in Cambodia will continue to have their education interrupted and their freedom curtailed.

About Sophoan Seng
I am the single son of a farming family from Siem Reap. I spent more than 10 years as a Buddhist monk. I graduated with a master’s degree in political science from the University of Hawaii and am a PhD candidate at the same university.

My interests are social-capital research, the empowerment of young people for social change, and grassroots participation to developing democracy. I am a freelance and president of the Khmer Youth Association of Alberta. I can be reached at sophan@hawaii.edu.

Spread the love
Posted in Culture, Economics, Education, Researches, Social | Comments Off on Email from Canada, Freedom and the challenges of teen pregnancy in Canada


« The decision of ICJ and the invisibility of modern world
My young boy nostalgia, part I »