Summary
The United States and the Kingdom of Cambodia have been expanding their once-limited ties for a number of years, although U.S. concerns about Cambodia’s human rights record still limit the scope of the bilateral relationship. The Obama Administration has taken steps to broaden engagement with Cambodia, partly in response to China’s growing diplomatic and economic influence in Cambodia and the Lower Mekong Delta region. U.S. interests in Cambodia include promoting development, trade and investment, regional security, civil society, democracy, and
human rights. U.S. military engagement with Cambodia has increased as well. These include naval port visits, military assistance, and joint exercises related to international peacekeeping, humanitarian activities, and maritime security. A key challenge for U.S. policy toward Cambodia lies in balancing efforts to engage the Kingdom on many fronts while promoting democracy and
human rights.

During the past decade, the Kingdom has made fitful progress in some areas of U.S. concern, including the conduct of elections, the development of civil society, labor rights, bringing some Khmer Rouge leaders to justice, public health, and counterterrorism measures. However, during
the past several years, the political system has become less democratic and civil liberties have been curtailed. Although political opposition groups may gain parliamentary seats in the upcoming July 2013 national elections by forming a united front and tapping into voter discontent among urban and marginalized groups, Prime Minister Hun Sen’s continued hold on power seems assured.

Over the past decade and a half, Hun Sen has bolstered his political strength through a combination of electoral victories, influence over the broadcast media and judiciary, legal and extra-legal political maneuvers, intimidation of opponents and critics, patronage, and economic
threats. Some observers believe that the fairness of the upcoming national elections has already been seriously weakened. Among the major concerns are the prohibition of opposition leader Sam Rainsy from running in the election, the expulsion of opposition lawmakers from the National
Assembly, inaccurate voter lists, and the alleged lack of neutrality of the National Election Commission.

The United States provides significant foreign aid to Cambodia, one of the poorest countries in Asia, largely through non-governmental organizations. The Kingdom received $76 million in U.S. assistance in FY2012. Program areas include public health, agricultural development,
environmental preservation, military training, maritime security, elections, civil society, and removal of explosive remnants of war. The United States is the largest foreign market for Cambodian goods, buying about half of the Kingdom’s garment exports.

China has been a principal source of loans, infrastructure development, investment, and foreign aid to the Kingdom. Some experts maintain that Chinese assistance has significantly reduced the effectiveness of traditional aid donors in attempting to pressure Phnom Penh to make advances in the areas of rule of law, democracy, and human rights. Some groups have expressed concerns
about the adverse effects of China’s development projects on the local environment. Other observers also contend that Beijing has influenced Cambodian foreign policy. During its
chairmanship of the Association of Southeast Asian Nations (ASEAN) in 2012, Cambodia was seen as acceding to Beijing’s desire to block attempts to raise the issue of maritime security in regional fora, to the consternation of the United States and other ASEAN nations.

Read the whole report: US-Cambodia Relations_Issues for the 113th Congress

Posted in Leadership, Politics, Social | Comments Off on U.S.-Cambodia Relations: Issues for the 113th Congress 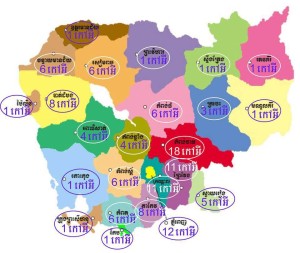 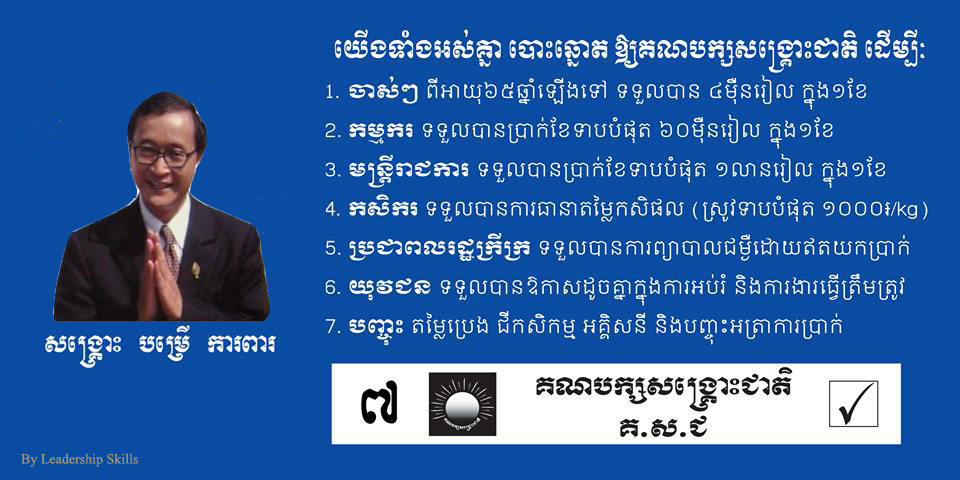 អ្នកអាចស្វែងយល់ពីគោលនយោបាយ ប្រវតិ្តមេដឹកនាំ និងប្រវត្តិគណបក្សធំៗទាំងពីនេះតាមគេហទំព័រខាងក្រោម។
You can learn about the policy, background of their key leaders and history of these two large parties through the links below.

Note: The list name is alphabetically posted (a to z)