Reflection of Political Leadership of Cambodia from Past to Present

At school, Cambodian children have learnt about many Khmer heroic Kings during the pre Angkorean period. For instance, King Jayavarman II, after escaping from the abdication of Java or Sailendra Kingdom, he made a long march across Cambodia to calling for a people power to fight against Sailendra occupation, and to proclaim back sovereignty of his Kingdom. It is said that he was raised and grown up in Sailendra but he eventually declared independence at Mahendra mountain (Phnom Kulen) to free from Sailendra. He began strengthening his Kingdom by building Mahendraparavata capital city with the installation of a sacred Linga of the Nation named “Devaraja”. From this period of 802 as inscribed in the stone, Cambodia enjoyed prosperity and candid strength in the region.

For post Angkorean period, Cambodia was seen as very fragile and dividing. According to palm leaves records, more than 700 years, Khmer Kings and leaders turned to fight against each other by asking Thai and Vietnam to back their cause.

However, this behavior was halted during the reign of King Ang Duong who projected his political leadership differently. He was raised and grown up in Thailand, his ascending to throne was expected in the same previous Kings. But the King secretly contacted France who was initially not interesting in this region at all. The history tells that the King failed at the first time because his messenger was killed by Thai authority. However, his second attempt was successful and French arrival was signed to be the protectorate of Cambodia. French fought with Siam and helped discard the power of Siam ever existed in Cambodia.

However, French arrival was not dislocated the power line between Vietnam and Cambodia. Under the French’s policy of Indo-China, Vietnam enjoyed most domination over Cambodia and Lao. This embedded legacy has affected on Cambodian political leadership until nowadays. 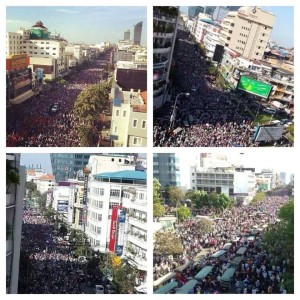 From my whole life, I have observed that Cambodian politics has played hard line approaches. This time, when the authority has allowed peaceful mass demonstration to march freely for few days and the participants visibly increasing, they come up with this idea “Coup” or an attempt to overthrow the government which is explicitly threatening. By definition, the peaceful mass demonstration could not be called an attempt to coup (detat) at all.

I observe the hard-line politics has been used in Cambodia since the election in 1993. Often, 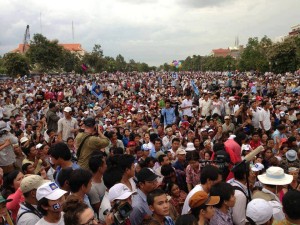 it is not dangerous if Cambodian politicians are contendering with one another, but for Cambodia, some of her leaders have always been seen so subservient to the third party (outsider). The crisis of 1993 election happened because of an attempt to separate Eastern zone plus the bloody coup detate in 1997 which was visibly involved as our Premier televised in soldier uniform from Vietnam plus the pressuring to sign additional border treaty in 2005 in which many activists were jailed. These three examples exhibit clearly on the leadership  of powerful third hand. From time to time, any Cambodian activists who are outspoken about the Koh Tral island or Eastern border line, they will be ended by jailing, life threatening or fleeing the country to avoid criminal sentencing. I listened RFA Forum this Dec.22 (watch clip below) and had chance to listen to our Premier’s speech on his logic on giving up the claiming back of Koh Tral very brokenhearted. 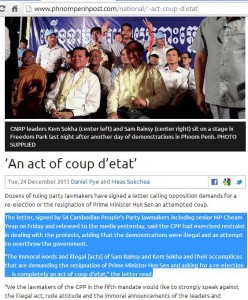 As we are Cambodians and we are working to protect Cambodia land and to protect our Constitution, why we condemn our own people who are sharing our common emotion and mentality? Why our top leader has always taken side with foreigner? Is it showing foreign influence is very strong in our system, or our leadership is very weak and xenophobic, or the political mechanism is not in our hand? If the last sort is exhibited truth, the learned, the scholars, and the young patriotic entities who are working within that system, cannot change anything to better off in leading this country independently.

To what I am speechless now is, while the CPP has perceived that part of their losing seats in the election, it is probably caused their unravel secret relationship with VN, but it seems like this party has ignored this part and they are going to visit VN, by the invitation of Vietnamese leader, during this very tense circumstance in Cambodia. I don’t see this coming event is really helpful for Cambodia and the CPP at all. Observers and opposition politicians have asked themselves that why the preceptor (ឧបជ្ឍា) from VN is likely very important during this very sensitive political contesting? And as a sovereign and independent state and may be very civilized like VN, is it more beneficial to sign memorandum with a government in which their own citizens are still contesting about election irregularity? I think VN should not back one party at all during this unresolved election conflict. Further more, from this type of policy of our neighboring country especially VN that Cambodia has transformed itself into a nation of self-victimization or what else I can say? 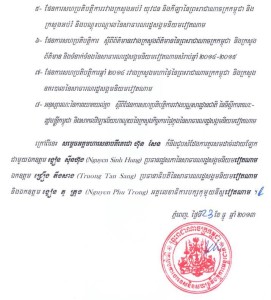 The peaceful mass demonstration has been occurred in Cambodia since the campaign in June, the election day in July and this post election. This ongoing daily basic rally has surely established a new culture of Cambodia of : non-violence principle, political participation, grassroots democracy, fearless and capable citizens etc.

Many people have compared the demonstration in Cambodia to that of in Thailand. Of course, the two demonstrations are very different from each other. In Thailand, the cause leading to the mass demonstration is a historical conflict between two government parties. But in Cambodia, the cause leading to mass demonstration come from the election which is found unfair, unfree and fraudulence. National Election of Cambodia (NEC) has rigged the election and produced false result, according to joint statement of 20 NGOs. It said 20% of the eligible ballots were stolen. NEC itself has been built dependently on the powerful CPP party. The procedures of the election have been seen in vast disfranchisement and bias. Until the last minute of the election result declaration, the NEC was seen under pressure of military and policemen deployed by the government. So it is candid to assume that the people who come to the street to demonstrate against the election have shared the same emotion: the perception of cheating by the NEC and this electoral committee has plundered their will. All Cambodian people cannot accept this act of cheating.

Cambodia might be able to model other Asian countries about non-violence protest and peaceful mass demonstration. CNRP has strongly committed to non-violence and peaceful mean. And this new emerge of political agenda should be credited to all Cambodian people. And if we think about organized groups, the credit must offer to all stakeholders especially CNRP, CPP, NGOs and Khmer community diaspora worldwide.


« The lost Buddha relic impacts on the treasure of Cambodia nation
Samdech Chuon Nath: Leadership Pioneer for the 21st Century »