King Jayavarman II is a great Khmer leader in 802

One of the greatest political leaders in Cambodia history is King Jayavarman II (802-835).  Archaeology scholars agreed that King Jayavarman II was abducted by Java or Sailendra Kingdom (present Indonesia+Malaysia) during their occupation in Cambodia. During that time, the weakness was caused by the dividing of lower Chenla and upper Chenla, and during this conflict, Sailenda King probably attacked, controlled and evacuated all Cambodian monarchy clans to their country. However, when he grew up, King Jayavarman II is believed to sneak into his motherland to lead a struggle to claim back this territory, re-build infrastructure and establish political institution. 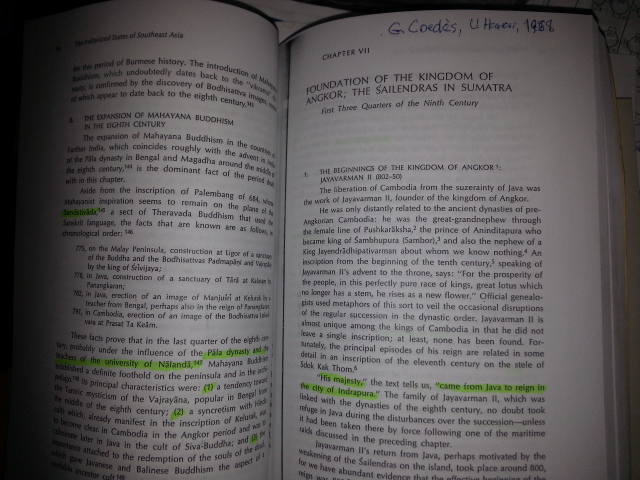 While the Kingdom was in crisis, King Jayavarman II was not only challenging with the foreign occupation, Sailendra, but his majesty also faced with many dividing fractions throughout the Kingdom. There were many echelons falsified their kingship or claimed to be supreme leaders in different locations. Seeing this, the young prince whose kingship is inherited from previous dynasties anchored his leadership in Indrapura. George Coedes wrote that Indrapura is present Thbong Khmum of Kompong Cham (or Thbong Khmum province as single party parliament of Cambodia recently ratified it). In that place, there were many clergies and Brahmans recognized his kingship and his leadership crusading for independence and national unity.

King Jayavarman II is considered the first prince who set up journey throughout Cambodia to propagate his leadership of unity and independence (great Chinese leader Mao was also making the longest trip throughout China to call for unification for the complete establishment of communism). 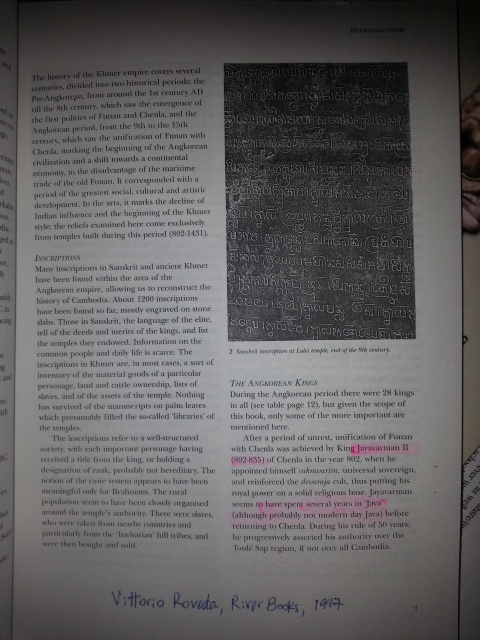 Kings during pre-Angkorean and Angkorean period, described that King Jayavarman II, under the scholarship advisory of Sivakaivalya, departed from Indrapura with his family members, army and educators to head towards Tonle Sab Lake, with the intention of advocating for national solidarity, site searching for strategic areas to build capital city and to universally proclaim suzerainty from Java. Then, his majesty stopped by at Bhavapura; he established Hariharalaya, Amarendrapura and Mahendraparvata or Phnom Kulen eventually.

At Phnom Kulen, Rong Chen temple as evidence, the King proclaimed sovereignty independence from Java completely with the installation of independent symbol of Siva Linga named “Devaraja” or “God-King” or “Maharaja” or “Chakravatin” or “Universal Monarch”.

Part of socio-political policy, the King created the effective political institution named “Devaraja”. This style of political leadership was part of the effort to combine between Khmer leadership with the Indian cult of governance. Sivakaivalya who was comprehensive in value, norm, attitude and behavior of Cambodian people invited Indian Brahman named Hiranyadhamma to conduct a ritual according to the sacred of Vinasikha and established the Lord of the Universe or Devaraja. Further to the existing of Khmer leadership, Brahman Hiranyadhamma also taught the King and his political councils the knowledge of the Vinasikha, the Nayottara, the Sammoha, and the Siraccheda. 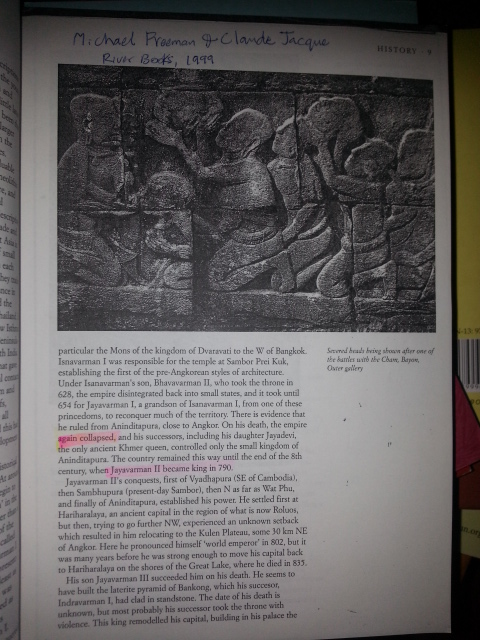 The creation of this political institution is the masterpiece of paving strong foundation for Cambodia of its uncontested advancement in centuries later. The institution itself doesn’t solely articulate the personal supremacy as many researchers have said about “Devaraja”, of course, the cult is to institutionalize the righteousness or the Dhamma or the rule of law which is the constitution of the nation. As the King Jayavarman II passed away after his reign of 48 years, the principles of this establishment have been implemented by the successor Kings continuously.

The leadership of King Jayavarman II mainly concentrated on agriculture and fishing. His intention to move from Thbong Khmum to Siem Reap is significantly to look for fertile land to grow rice as well as to catch fish from this rich fresh water Tonle Sab Lake.

Many young generations of monarch inherited from King Jayavarman II never gave up this place. Nowadays, the lands surrounding Rolous and Angkor area are still greenery of rice stalk and rich natural resources.

Installing the sacred Linga on the top of Phnom Kulen was revered by all Khmer leaders and people in late centuries. The waterfall pumped up from the top of this mountain run through different villages and thousand hectares of rice paddy. People used this water to drink and to cure diseases. 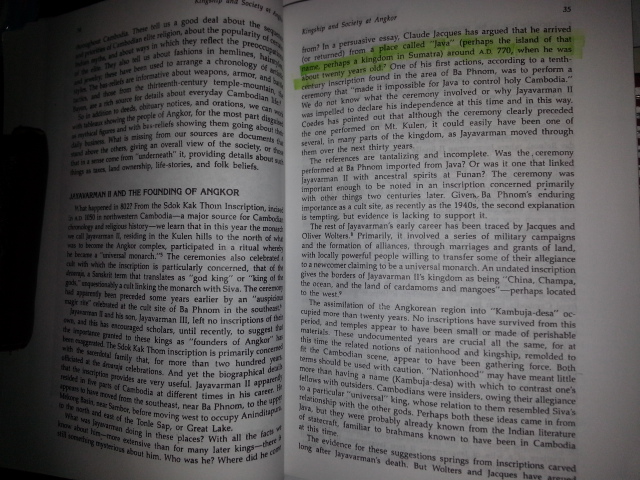 water from this river during each state visit.

All Cambodian leaders must recite one stanza that “life is sooner perished but nation is eternalized. If one has failed their leadership to protect the interest of the nation, the bad consequence will fall up on them eternally”. 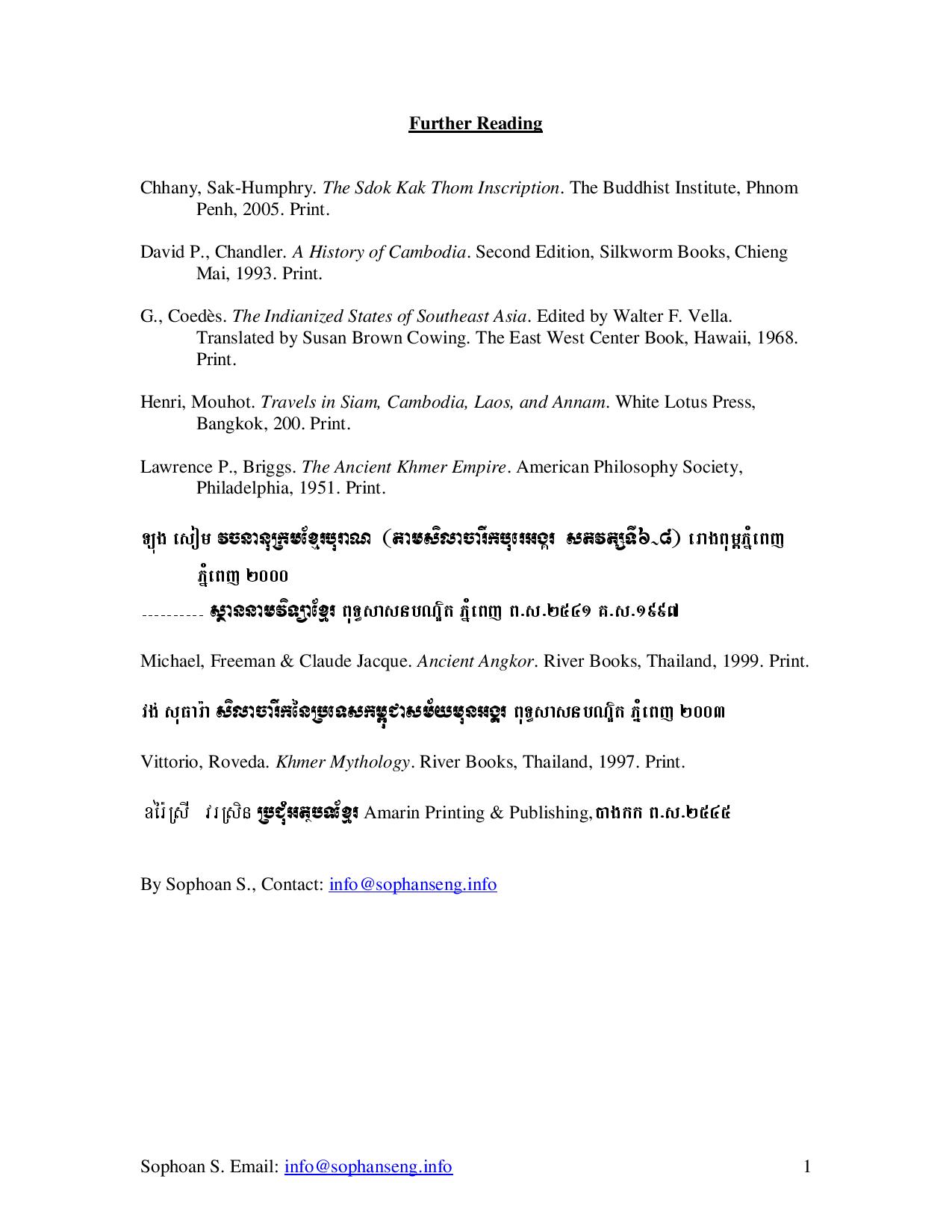