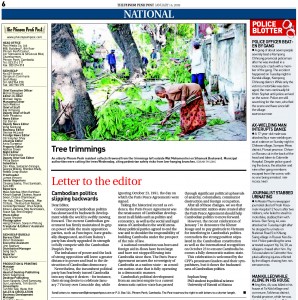 Contemporary Cambodian politics has showcased its backwards development while the world is swiftly moving forward. The current Cambodian government has firmly maintained its grip on power while the main opposition parties, such as Funcinpec, have gradually disappeared, and Sam Rainsy’s party has slowly upgraded its strength to fully compete with the Cambodian People’s Party.

The imbalance of power and the lack of strong opposition will leave a greater distance in power and lead to the destruction of Cambodian democracy.

Nevertheless, the incumbent political party has fearlessly turned Cambodia into any shape it desires – for instance, their strong desire to celebrate January 7 Victory over Genocide day, while ignoring October 23, 1991, the day on which the Paris Peace Agreements were signed.

Taking the historical record as evidence, the Paris Peace Agreement was the renaissance of Cambodian development in all fields such as politics and economics, as well as the social and legal status of Cambodia in the world arena. Many political parties agreed to end the war and to shoulder the responsibility of building Cambodia under the prospect of the rule of law.

A national constitution was born and foreign aid in-flows have been large and have not stopped flowing into Cambodia since then. The Paris Peace Agreement assures the sovereignty of Cambodia as a nation-state – as a modern nation-state that is fully operating in a democratic manner.

Cambodia’s political development from an ancient empire to a current democratic nation-state has passed through significant political upheavals of anarchy, colonialism, communist destruction and foreign occupation.

After all of these changes, we see that the democratic nation-state created after the Paris Peace Agreement should help Cambodian politics to move forward.

However, the recent celebration of January 7 to denounce the Khmer Rouge and to pay gratitude to Vietnam for interfering in Cambodia’s politics contradicts the strong position stipulated in the Cambodian constitution as well as the international recognition on October 23 to ensure Cambodia becomes a fully democratic nation-state.

This celebration is welcomed by the CPP’s prominent leaders and their sympathisers, but it shows the backwardness of Cambodian politics.


« Things of connectiveness of nationalism
The Recommendations of Ta Meas »