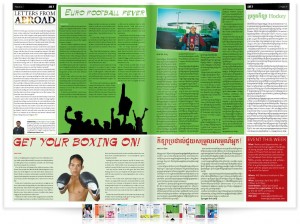 Just few weeks ago, Canadians were proudly cheering on their team as they celebrated Canada’s gold-medal hockey win over America in the 2010 Olympic winter games held in Vancouver. Days afterwards, the National Hockey League (NHL) resumed its regular season, and in April the league will begin its own championship tournament. There are 32 hockey teams in the NHL who represent 32 cities with their hockey-playing prowess.

The league is divided into 16 teams on the West Coast and 16 teams on the East Coast. Canada has six teams in the East Coast league, with the other 26 teams coming from America. The playoffs are the grand finale of the season, where eight teams from each side of the continent play each other for the Stanley Cup, a trophy that is given to the league’s best team each year.

“I am cheering for the Calgary Flames to reach the playoffs,” said Kevin Troung, who is an 18-year-old fan of the Canadian hockey team. “They are currently battling with the Red Wings of Detroit to get a chance to enter the Stanley Cup finals.”

While football is the most popular sport in Cambodia, hockey is without a doubt the most popular sport in Canada, and the two games have many differences. In football, the players run around on the green grass wearing nothing but shin pads to protect themselves from injury. Hockey players, on the other hand, are equipped with helmets, padding and a stick that they use to move the puck (like a flattened ball) around the ice while they move around on their skates like hurricanes. Each side is composed of six players: three forwards who attempt to hit the puck into the opponent’s small goal, and two defenders and a goalie who try to stop the other team from scoring. Like soccer, the winner is the team that scores the most goals.

Media commentators in Canada describe hockey as the most attractive sport in the world, with the ability to bring together people from all ages and social strata. It is not only players in the NHL who devote themselves to hockey; schools and communities encourage students and youths to join their own teams for a healthy extracurricular activity, or in some cases to begin a career in athletics. And it is not only in the arena that you see hockey fans. It is common to see streetcars and houses adorned with Flames flasg all around Calgary.

Sophan Seng is a Cambodian living in Canada. He is the facilitator of the Khmer-Canadian Buddhist Cultural Center and president of the Khmer Youth Association of Alberta. If you are living abroad and you want to share your experiences with our readers, send your letters to lift@phnompenhpost.com This e-mail address is being protected from spambots. You need JavaScript enabled to view it

5 Comments to Hocky battling in Canada