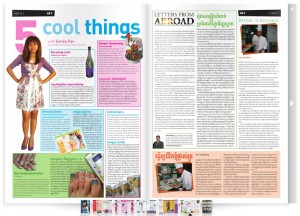 While the location of the celebration may not be familiar to many Cambodians, the events themselves have changed little among Cambodians living abroad. Go to a Khmer New Year celebration in Canada and you are likely to see authentic food, religious ceremonies, popular games, and traditional arts and entertainment.

I would say that every Khmer family I know has plenty of traditional clothes for such events. Peddlers display different styles of Khmer cloths every time a cultural event is upcoming.

“I like the style a lot, especially Khmer traditional outfits for weddings,” said Kimleine.

While traditional styles have remained the same for many years, other styles are always changing, and it can be expensive to keep up. Kimleine complained that the rapid change of karaoke fashion is costly for her to follow. “I think popular Khmer styles like we see on karaoke videos are easily outdated,” she said. “So we always need to buy a new one, which is very expensive.”

According to researcher Janet Mclellan, Cambodian Canadians are still strongly attached to traditional styles. In a posting on the Multicultural Canada Web site, the author explained that “during cultural celebrations, women and young girls wear the traditional Khmer dress of sarong, sampot and krama (a long scarf in different colours, woven from cotton or silk)”. But these outfits are not easy to wear when you are used to more modern clothes. While wearing traditional clothes, one must be careful while walking, sitting or moving.

As with many things in Cambodian culture, the younger generation is being asked to carry on the traditions of their family and countrymen. While most of them, like Kimleine, are happy to do this, it requires an increasing amount of flexibility and adaptability for youth who have embraced modernity in the rest of their life.


« Hocky battling in Canada
Solution for unemployment in Canada »

5 Comments to Khmer Stylizing in Canada