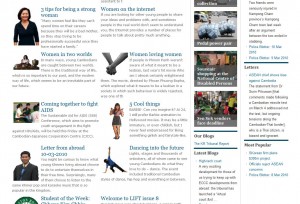 You might be curious to know what young Khmers living abroad choose to do to entertain themselves in their free time. Surprisingly, many of them choose to listen to the same Khmer pop and karaoke music that is so popular in the Kingdom.

While riding in his car, I noticed that my friend Patrick owned a number of Khmer CDs, ranging from oldies to modern songs. “I have always listened to Khmer songs,” said 23-year-old Patrick Meas, who has lived in Alberta since he was very young. “Preap Sovat is my favourite singer.”

Considering that he has lived most of his life away from Cambodia, as a Canadian citizen, it is incredible to see that Patrick can sing “Beautiful Girls” in Khmer.

While the song was originally sung by Jamaica-American rapper Sean Kingston, it  is very popular in Canada and has been repeatedly played on the radio here. The fact that an American song was translated into Khmer and now is being sung by Canadians shows the intermingling of cultures around the world.

Khmer music is not only providing Cambodian immigrants with a chance to enjoy their free time, it is also an opportunity to listen to the Khmer language. Many young Khmers living abroad are able to understand and communicate in Khmer language with their parents at home and some friends from Cambodia, but do not have too many chances to practice the language with other native speakers. Deabra Chan, a 23-year-old Khmer Canadian, said, “Khmer music has not only entertained me, but also offered me with knowledge of society, places and expressions, which has developed my Khmer language ability.” Deabra has also been involved in Khmer community volunteering and Khmer ballet dance. “I like to sing Karaoke at home on the weekend,” she said.

Many young Khmer-Canadians absorb the multi-cultured stream of concepts that come through music from around North America, and around the world. Listening to a wide range of musicians enhances their capacity for open-mindedness and tolerance. However, while associating with friends from diverse backgrounds, they also have the opportunity to take pride in Khmer music and show it off to their peers.

Khmer communities in Canada organise entertainment two to three times every year. They invite popular Khmer singers to host the events, and also ask them to perform. This year, the Khmer community in Calgary, Alberta, hosted a special year-end concert by inviting a popular singer from Cambodia, Ms Chhoun Sreymao.

Young Khmer-Canadians have been raised in the Western way, but Khmer music is still embedded in their soul. Their way of life may not be entirely Cambodian,  but they still hold on to the beautiful music of Cambodia in their lives.

3 Comments to Young Khmers abroad and the Khmer music