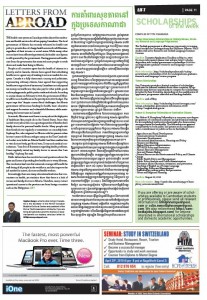 As a result, Albertans won’t have to worry about the high price of healthcare like people do in the United States. Since they needn’t worry about the cost, a growing number of families have family doctors for personal health checks. Many people visit their family doctor regularly or sometimes on a monthly basis. Sopheap Ros, who migrated to Alberta with his parents when he was 3-years-old from a refugee camp on the Thai-Cambodian border, now holds an Alberta Health Card that enables him to visit doctors freely, get blood tests, X-rays and medical consultations. “I am free of frustration regarding health problems. I have regularly visited my family doctor to ensure that I am healthy,” Sopheap Ros said.

Public debate here has revolved around questions about the gains and losses of providing free healthcare to every Albertan. The conclusion has been that universal coverage will benefit the well-being of all people in the workforce, and also improve the job market for nurses, doctors and health workers.

Interestingly, there are many educational institutes that concentrate on health, yet statistics show that there is a lack of nurses and family doctors in Alberta. Therefore, many current operational nurses in the province are from foreign countries such as the Philippines.


« Solution for unemployment in Canada
Climbing the ladder: Hou Chhivneath »

7 Comments to Health-Care System in Canada