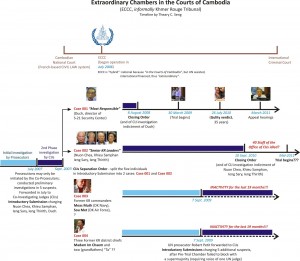 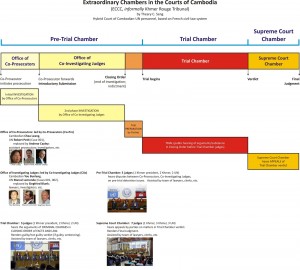 In preparation for the start of trial hearings beginning on 27 June 2011 of Case 002 against the surviving Khmer Rouge senior leaders Nuon Chea, Khieu Samphan, Ieng Sary and Ieng Thirith, KI Media is starting a new series in posting installations of the public document of the Closing Order of Case 002. The Closing Order of the Co-Investigating Judges forms the basic document from which all the parties (Co-Prosecutors, Co-Lead Lawyers for all civil parties, Defense Lawyers) will be making their arguments before the Trial Chamber judges (one Cambodian President, 2 Cambodian Judges, 2 UN judges).  Up until now, the hearings involving these four surviving senior Khmer Rouge leaders have been in the Pre-Trial Chamber over issues of pre-trial detention and jurisdictional issues.  Beginning in June 2011, the Trial Chamber will hear the substantive arguments over the criminal charges (e.g. genocide, crimes against humanity, penal code of 1956).
. . .
CLOSING ORDER
of Co-Investigating Judges You Bunleng and Marcel Lemonde, 15 September 2010
II. ADMINISTRATIVE STRUCTURES (CENTRE)
A. THE COMMUNIST PARTY OF KAMPUCHEA (CPK)
level.91
B. CENTRAL COMMITTEE
Party”.94
C. STANDING COMMITTEE
D. OFFICES OF “870”
870″ or the “Organization’s Office” without clarity about which particular office was being referred to.
responsibility.159 K-18 was a telegraph unit through which radio communications were received and then directed to K-1.160
E. MINISTRIES (GOVERNMENT) OF DEMOCRATIC KAMPUCHEA

62.               By a decision of 30 March 1976, the Central Committee decided the composition of the organs of state called to replace, as the official government, the Royal Government of National Union of Kampuchea.178 It was said that the government “must be a proper party organ. It must be our own state”. The ministers were publicly announced on 14 April 1976.179