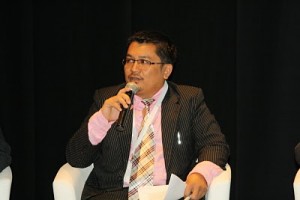 Freedom of expression in Cambodia has been steadily squeezed, with those wanting to speak openly and protest peacefully increasingly stifled by legislative and judicial means. Leveraging its strong parliamentary majority won at the 2008 polls, the governing Cambodian People’s Party (CPP) has passed and continues to pass restrictive laws that play to its political advantage. The courts, which are under total executive control, often act as anti-democratic enforcer, implementing draconian measures under a legislative veil of legitimacy.

For example, the Penal Code, which came into force in December 2010, maintains the dissemination of “disinformation” and defamation as criminal offenses punishable by prison terms. These codes have since been used to silence human-rights activists and others who question or criticize the RGC’s personalities, policies and actions.

Limiting freedom of association has recently been given government priority. The latest – and most controversial – law in this legislative campaign is the pending Law on Associations and Non-Governmental Organizations (LANGO), which is set to impose mandatory registration requirements on all non-governmental organizations (NGOs) and community-based organizations while allowing for arbitrary administrative sanctions, including suspension and closure.

The forthcoming Law on Trade Unions, as currently drafted, also threatens to deal a serious blow to the right of freedom of association in Cambodia, imposing onerous registration processes and reporting obligations on groups of employees.

Under both laws, groups must register their activities and the very act of forming associations without official approval will be deemed illegal. Recent events, including the suspension of an NGO involved in monitoring a government compensation program and the official harassment and intimidation of other watchdog and advocacy NGOs, suggest that such laws are part of a wider effort to erode democratic space and silence civil society.

Without a viable political opposition, Cambodia now functions as a veritable one-party state. Sam Rainsy, the eponymous leader of the opposition Sam Rainsy Party, is in exile fleeing a raft of politically-motivated criminal charges. Kem Sokha, head of the Human Rights Party, has also come under legal threat. It is not inconceivable that the next general election in 2013 could be contested without the leaders of the two main opposition parties.

Hun Sen outlined his intention “to make the opposition group die” in a speech earlier this year and later pledged to arrest a government critic whose comments about the Arab Spring were perceived as an attempt to foment a similar popular uprising in Cambodia.

Rather than limiting the space for opposition voices, the RGC should ensure that the government’s ongoing development is shared by all, with social development prioritized as much as economic development. An increasingly educated and technology savvy new generation can play its part, as young people take advantage of opportunities that their elders were deprived of by the grim demands of the Khmer Rouge’s brutal regime.

A rising professional class envisions Cambodia as a high-tech, educated, prosperous country playing a leading role in the Association of Southeast Asian Nations (ASEAN). Under the current regime and restrictions, it’s a democratic vision that risks going unrealized.

There is much that the international community can do. While the RGC contends that the implementation and protection of democracy and human rights is a sovereign issue not subject to international interference, the 18 other signatories of the Paris Peace Agreement – as well as the United Nations (UN) – are legally bound to protect and promote democracy and human rights in Cambodia.

These parties can use their economic and political leverage to ensure that the long-suffering Cambodian people can at long last enjoy the democracy and human rights that were promised to them two decades ago.

All stakeholders in Cambodia’s future – the RGC, the signatories to the Paris Peace Agreement, the UN, the donors and the people of Cambodia – should use this anniversary as an opportunity to ensure that their substantial commitment and investment is not squandered.

Ou Virak is president of the Phnom Penh-based Cambodian Center for Human Rights.

Speaking Freely is an Asia Times Online feature that allows guest writers to have their say. Please click here if you are interested in contributing. Articles submitted for this section allow our readers to express their opinions and do not necessarily meet the same editorial standards of Asia Times Online’s regular contributors.