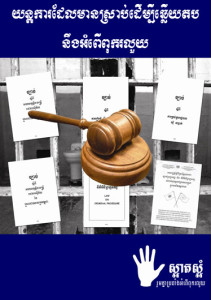 Corruption has been strongly embedded in Cambodian society under the current ruling party, the CPP. Observers noticed that “the longer CPP ruled Cambodia, the longer corruption pandemic contagious within this society.” With this perspective, many civilized countries have changed the leaders as well as displaced the top officials to ensure they can cut off the creation of patronage system. But in Cambodia, the cells and patronage of corruption have been never lessened. The cells and patronage systems have been relentlessly increased for its political leadership of “crony capitalism” or “modern autocratic” or “clientele-patron system”.

Listening the Corruption Policy addressed by H.E.Yem Punnarith from the CNRP, the core mechanism to tackle corruption have been expounded and clarified concrete solution. For instance, to halt the corruption among public servants unless the government increase their salary at the level of living standard as well as be able to compete with the goods inflation. To halt the corruption among the elites and the powerful, the independent court as well as the independent unit of corruption body must be established etc.

Further to above concrete solution, the political will with tangible policy has been addressed as the representative repeatedly affirmed on the strengthening the rule of law and the good governance if CNRP won the election.


The speaker eloquently pointed key points of cause and effect of corruption. Speaker might have not enough time to mention on the importance of change the leader as well as to displace the key positions in the government in a regular basic as part of a concrete mechanism to tackle corruption top-down or vertical line, not horizontal ground.

For the ruling party who has controlled the country for more than two decades and the status quo is their key political maneuver to be cared has repeatedly theorized that corruption is existing in everywhere in every country in which it is part of the greed of human behavior, but for the new democratic movement and humanism they have relentlessly addressed the issue as unacceptable and search all methodology to handle with this social virus (corruption).

Let go to vote altogether all Khmer compatriots on 28 July 2013!