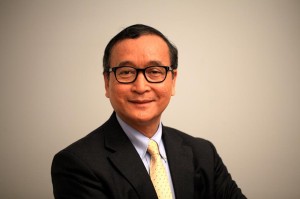 Election campaign kicked off in Cambodia on June 27, 2013 in the meantime Cambodia National Election Committee (NEC) released the list name of the candidates competing in each constituency.

Eventually, the list name is not included Sam Rainsy who is a prominent leader of the opposition party. Sam Rainsy is a self-exiled politician in French to avoid 12 years jail of court conviction in Cambodia in which the observers claimed it is politically motivated.

The absence of Sam Rainsy in the election this time has placed a critical question on the “legitimacy” on the election if the Cambodian Poeple’s Party (CPP) won. Democratic election in Cambodia was firstly organized by the United Nations Transitional Authority for Cambodia (UNTAC) in 1993 after the Paris Peace Accord was created to settle down the conflict and develop democracy in this country. But the legacy of UNTAC has been remarkably obstructed by the coup detat in 1997 when second prime minister Hun Sen was able to claim his single premiership.

Since then, the national election has been totally monitored by the government which has never been able to separate itself from the ruling party CPP at all. During each national election such as in 1998, 2003, 2008 and this upcoming 2013, the ruling party has enjoyed free ride on consolidating all means to win the election. Like Cambodia Daily reported on June 29, 2013 that “Hun Sen has bolstered his political strength through a combination of electoral victories, influence over the broadcast media and judiciary, legal and extra-legal political maneuvers, intimidation of opponents, patronage, and economic threats,”.

At the present, the merge of the opposition parties ie the Sam Rainsy Party and the Human Rights Party has established a new challenge to the ruling party CPP to merely predict their winning result. Thus, the trumping up charges towards to the opponent such as expelling the 27 opposition legislators from the National Assembly and cutting off their salary as well as the recent order to close all broadcasting media opposing their party, is considered an extra unfair election game worse than previous elections.

However, the inability to returning back of Sam Rainsy who is the prominent democratic leader and the president of the largest opponent party, the Cambodia National Rescue Party (CNRP) this time, is posing a great threat to the political legitimacy of Hun Sen if the ruling party CPP won the election on this July 28, 2013.