The Twilight of Social Fabric of Cambodian Society

Social fabric of Cambodian society is one of the rewarding studies on how to establish “strong institution of Cambodia”. According to a dictionary, social fabric means “The demographics of an area that consists of wealth, 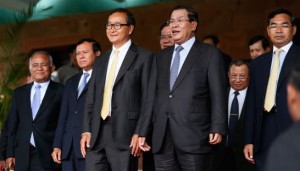 ethnic composition, level of education, rate of employment and regional values that are combined to create this social fabric.” But according to generalized concept, social fabric is the primary foundation of society bonding or society cohesiveness. Primary foundation of Cambodia doesn’t refer to the past foundation, but the present cultivating phenomena of this state crafting. Many puzzling questions have evolved within Khmer mentality that who are responsible for the cracking, demolishing, revitalizing and reinventing of this society?

The reality that all Khmers must realize

Since the post-cold war, Cambodia at least has been traumatized by three social failures: the swift change from monarchy to republican during the Lon Nol regime which was trembled by the conflict between democratic bloc of USA and communist bloc of China, the Khmer Rouge regime of absolute violence power between 1975 to 1979, and the Cambodia socialist regime under Vietnamese occupation between 1979 to 1989. The syndromes of this traumatic reality are the visible dividing between supporters of monarchy and republican, the violence-embedded behavior of the Khmer Rouge and post-Khmer Rouge, and the nondetachable anti-Vietnamese sentiment. The reality of this divided social pattern is displaying in our daily sight of at least one Cambodian has carried one of these syndromes or two or all three together indistinguishably. 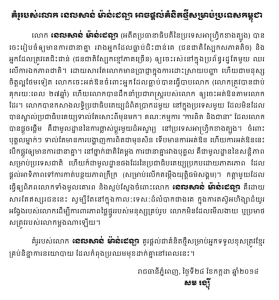 One of the important resources to build a strong institution is to look at how effective communication between the state and society can respond to its realism, pragmatism, practicality and procedural-legal responsiveness. New sight of political culture of Cambodia at the present is the emergence of two-parties state and the political will of the top leaders of both CNRP and CPP. The agreement to settle down the confrontation on the street to paving way for the debate in the parliament through the reforming of National Election Committees (NEC), re-regulating the internal rules of the assembly which major voice can respect lesser voice, and lesser voice and respect major voice, and the resuming check and balance of democratic power, are all responsive.

As the ninth member of the NEC has been chosen, Dr. Pung Chiv Kek of LICADHO’s founder, the next step of NEC reform is on public blinking eyes. But Cambodian people are still reluctant to predict good outcome from this move especially their doubts fall upon Hun Sen who is well-known for his great ability of tactician to advance his political career through means of undemocratic past. Like recent handcuffing and jailing of 7 MPs-elect of CNRP without fair trial, Hun Sen can utilize all his existing means to defeat, defame, or demolish his rivals. But this time, through the recent waking-up call of anti-Hun Sen voting and demonstrations, he has possibly surrendered himself by putting aside his past great techniques to embrace new way of competing through fair ballots and public participation. Sam Rainsy has also said that Hun Sen has embraced his new leadership style. Hence, the Cambodian people are still not quickly believing on this swift change. Hun Sen said before about his tactic of allowing balloon to be inflated to its apogee as he can deflate it to the eternal nonexistence.

However, it seems arguable that his leadership has been changed by the new realization of young leaders or pragmatist clout from both CPP and CNRP. Those has silently demanded leadership change to embrace principles rather than stick on 3 kingdoms of Chinese legendary movie.

Other thing is the non-cornering approach of the opposition leader. At the first party’s convention on July 27, 2014, top leader Sam Rainsy stated clearly on his non-supporting on the culture of “ant and fish tradition” by “embracing genuine national reconciliation of non-violence, non-revenge, and pursuing full heuristic political will to solve the problems of the nation”.

If the 7 points agreement shall be implemented without changing or obstructing, the hope for strong institutionalizing of Cambodia politics will pave a strong primary foundation to tackle all three mentioned social syndromes and it will become the comprehensive method of building social fabric of Cambodian society.

The Buddha’s teaching of non-violence, compassion and  wisdom 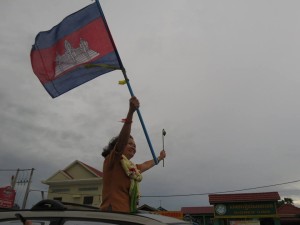 Cambodian Buddhists are representing 95% of the total population in which there are about 4000 temples residential of more than 60,000 Buddhist monks. Through this density of moral population plus the strong cultural and traditional belief, the Buddhism has played important role to invent new social fabric of Cambodian society. We can say nothing in this world can hide itself from the “truth”, the “moon” and the “sun” or it is the “wisdom”, the “compassion” , and the “non-violence”.

CNRP has apparently embraced this policy and it is one ultimate answer to bring back the Cambodian value is of the “Non-Violence”. Top leader Sam Rainsy, Kem Sokha and well-known women wing Mu Sochua have claimed this same value “non-violence”. Mu Sochua has always carried “lotus flower” as symbol of compassion, non-violence and wisdom. Since her daily routine to free the freedom park to the latest event of her release from Prey Sor prison, lotus flower has become her attire for public attention.

The non-violence mean can defeat the culture of violence and division, the compassion mean can renege the politicians from fear of revenge when they are out of power, and the wisdom mean can produce large capital for sustainable democratic development. These three strategic means can surely spell out dividing, violence and Vietnamese ethnic sentiment in order to pave a new social fabric of Cambodian society.

Cambodian political leadership is a home made one

Once, a journalist asked me what democratic country that Cambodia should copy to develop its democracy? I respond that none. Cambodia can create their own democracy through the blending of universal value of democracy, Cambodian culture and Buddhism. With this argument, democracy itself has a lot of flaws. But Cambodia democracy will ensure that all Cambodian people can enjoy both physical and mental well-being. Many democratic countries advanced their politics and economic to the edge of materialistic achievement while the people are still shortcoming mental strength.

After reconciling all the three suffering syndromes, the new social fabric of Cambodian society should be enriched by both physical and mental well-being.

One Comment to The Twilight of Social Fabric of Cambodian Society