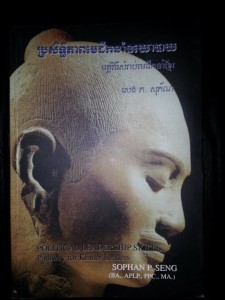 A framework for understanding

An Indian spiritual sage, Jiddu Krishnamuri, sees a person’s life as a “constant struggle… a battlefield not only within (oneself) but also outwardly.” Our tendency to be self-centered, to view the world as though we live at the center of it, stands in the way of building a sane, happy, intelligent life.

Recall the book Charet Khmer by the late Boun Chan Mol, a Khmer political prisoner jailed at KohTralach during French rule: He ranked A’thmarAnh (the “I’ism”) at the apex of Khmer personality traits that should be abandoned.

New York University social psychology professor Janathan Haidt says all the world’s cultures have members with an “excessive and self-righteous tendency to see the world in terms of good versus evil,” or “moralism” that binds them into believing “We’re good, they are evil.” They live in a world of their own creations – “a world of insults, opportunities, status symbols, betrayals.”

Lord Buddha and elder Chinese teacher Confucius (551 BC-479 BC), preach, “Humility is the solid foundation of all virtues.” Humility is a low view of one’s own importance; it is humbleness, modesty, a lack of pride and vanity. It stands opposed to the I, me, mine, A’thmar Anh.

Trust is the foundation of human relationships. Insert doubt and trust falters. As trust erodes, respect for the other is diminished. Confucius says, “Without feelings of respect, what is there to distinguish men from beasts?” “Doubt separates people… disintegrates friendships and breaks up pleasant relations… a thorn that irritates and hurts; a sword that kills,” Buddha warns. “There is nothing more dreadful than the habit of doubt.”

Some people make a habit of creating defamation and misinformation. They dig for dirt, engage in character assassination – with the purpose of diminishing trust in and undermining another’s credibility. In Khmer society, as in others, this has been a common theme noted by Boun Chan Mol, who described kumnit ph’chanh ph’chal(propensities to destroy), kumnit sangsoek suor pouch (generational vendetta), among others. Presumably those who engage in these dark arts anticipate benefiting from a share of ill-gotten privilege.

Professor Haidt: “When political opponents are demonized rather than debated, compromise, and cooperation become moral failings and people begin to believe that their righteous ends justify the use of any means.”

Cambodian politicians speak much lately about the “Culture of Dialogue.” The nonprofit Co-Intelligence Institute posits, “Not all communication is a dialogue”; only a “shared exploration towards greater understanding, connection, or possibility” is a dialogue.

In dialogue, different sides work toward finding a common ground and understanding with each side having a genuine concern for the other, listening, learning, and working with the others to attain wholeness and interconnectedness and a workable solution. A dialogue is non-confrontational; one party does not seek to be right at the expense of others; it is open-ended.

To the displeasure of some – including a few friends and acquaintances – I advocated for the Cambodian National Rescue Party’s participation in the National Assembly despite the failure to investigate alleged electoral irregularities and fraud that gave Prime Minister Hun Sen and his ruling Cambodian People’s Party 68 seats, and the CNRP, 55.

The writing was on the wall. The premier is not so blind that after 34 years in power he risks bloodshed to stay on. Cambodians in general want change. Human Rights Watch charged, “Hun Sen has been linked to a wide range of serious human rights violations: extrajudicial killings, torture, arbitrary arrests, summary trials, censorship, bans on assembly and association; and a national network of spies and informers intended to frighten and intimidate the public into submission.”

No government can stay in power without popular support.

Eric Arthur Blair (1903-1950), an English essayist and critic who preferred the pen name George Orwell, wrote: “If large numbers of people are interested in freedom of speech, there will be freedom of speech, even if the law forbids it; if public opinion is sluggish, inconvenient minorities will be persecuted, even if law exists to protect them.”

The cunning and shrewd Cambodian premier is facing charges of crimes against humanity filed at the International Criminal Court against his “Ruling Elite.” As the 2018 elections approach, this strongman, who thinks of himself as a Khmer Machiavellian Chinese-Samkok strategist, is confronted by Buddha’s teaching, “Nothing is permanent.” Begrudgingly, he has undertaken some reforms. He wants to leave a decent legacy.

But die-hard supporters of the CNRP brand any engagement with the CPP as treachery. While the Premier divides and rules, buys off, threatens, and imprisons opponents, amplifies doubt, those in the CNRP damage themselves with self-inflicted wounds. Internal dissension is on the rise.

Some say the Premier wants a triangular competition for the 2018 election to keep himself in power. I see him as welcoming an emergence of many political parties. It shows the flowering of free competition under his regime. It denies votes to the CNRP as happened in the past.

The Premier is busy applying his Chinese Samkok maneuvers. What do Cambodian democrats do?

The AHRC is not responsible for the views shared in this article, which do not necessarily reflect its own.

Dr. Gaffar Peang-Meth is retired from the University of Guam, where he taught political science for 13 years. He currently lives in the United States. He can be reached at peangmeth@gmail.com.

About AHRC:The Asian Human Rights Commission is a regional non-governmental organisation that monitors human rights in Asia, documents violations and advocates for justice and institutional reform to ensure the protection and promotion of these rights. The Hong Kong-based group was founded in 1984.