What should CNRP and CPP behave for this 2015?

CNRP must not neglect this absorbing activity through concessioning various political means such as accepting to reform the NEC within a jargon paper contract (while deviling in details), giving TV channel (while strictly regulating inside the application form (អញ្ញាប័ណ្ណ)), and upgrading opposition party to officially recognize through the constitution in mandating power of opposition leader paralleling to that Prime Minister (while the leverages and obligations of this post are not yet detailed) etc.

Today is January 1, 2015. I am staying home for this year holiday. This holiday should accommodate me inside couch to read or to watch movies rather than keyboarding to express view on the blog. Actually, I cannot abstain to pen idea and paint vision for the collective interests of Cambodia at all.

CNRP is the opposition party that has been built within democratic principles while CPP has been born from different wombs of political spectrum. Opposition’s obligations are to criticize the government. Criticizing government doesn’t mean you are going to oppose everything that government has been doing, or to say the least, if the government is continuing to jail opposition activists and civil rights activists, opposition leaders must not only say this activity is not to create the culture of dialogue or politics of cooperation. Deploying this rhetoric doesn’t translate the duties and obligations of the opposition at all.

Why CNRP must slow down or low down its criticizing crusade towards the government? Because the opposition wants a new NEC to be reborn first, or waiting for other appropriate circumstances etc.? No. No. Criticizing the government in failure to implement the laws, to develop economic equally, or to fail to put the interest of the nation first etc. is a must. Opposition CNRP must continue to criticize and furthering its critics authority by bringing professionalism to its table through doing scientific researches and compiling those research findings into dossiers or documents to educate the public.

Whenever, CNRP stopped criticizing the government (ruling party), it means the life of the CNRP shall also perish. 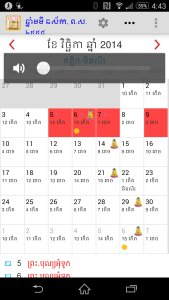 According to Cambodian lunar calendar, the new year shall likely start in the first moon day of Vishakha each year. This adoption owing to the birth of Lord Buddha on the Full Moon of Vishaka, so from that day should be considered the first day of the year calendar. However, Cambodia norm and costume have adopted Gregorian lunar month to follow the phase of the moon by calculating according to bright moon night (ខ្នើត)and dark moon night (រនោច). The first month Khmers have started to count is likely first moon day (១ កើត) of Magha (មាឃ) fallen into around ending of November and middle of December. This lunar month calendar has been using among Buddhist temple congregations and rural Cambodians. But as probably adopted by French colony, the city dwellers and government including school teachers and students are using Solar Calendar system like Western culture by adopting January (មករា), February (កុម្ភៈ) etc. and use the A.D. year.

END_OF_DOCUMENT_TOKEN_TO_BE_REPLACED

Posted in Culture, Economics, Education, Leadership, Politics, Researches, Social, Tourism | Comments Off on What should CNRP and CPP behave for this 2015?