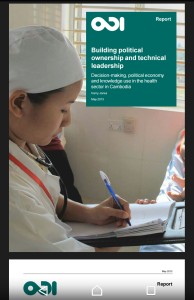 Based on the findings of the study, the following recommendations can be made for AusAID Cambodia and other international development agencies engaging in the health sector in the country.

6.1 Recommendations for the next phase of programming

At the time of writing, it seems likely that HSSP II will be extended by one year, with the start of 2015 most likely to be the starting point of the next phase of AusAID support to the sector (Pearson, 2012). The following recommendations represent principles and ideas which could help guide the overall approach for this next phase of programming.

1. Effective support for Cambodia’s health sector may involve designing elements of programmes to ‘go with the grain’ of political economy dynamics. This has the potential to have a high impact on health outcomes.

a. Attempting to work with the trend of mass patronage, by encouraging health to be seen as an appropriate ‘gift’ to constituents (e.g. disbursing vaccinations, dietary supplements, medicines), would be likely to garner the required behind-the-scenes approvals and ownership which could see broad, fast and effective roll-out with minimal leakage.

b. This could involve providing funding and/or in-kind resources for relatively top-down, one-off solutions to certain problems – for example, vaccinations, bed nets, or nutritional supplements. Key local government actors (and possibly CPP working groups) should be engaged, and it would be important that there were space for government and/or CPP to claim some credit for handouts. The issues of branding and publicity would need to be carefully considered.

c. Patronage-based distribution helps trickle down resources and allow for services to reach local people to some extent; yet it is far from being systematic and equitable. Complementary activities could be carried out to compensate for the downsides of mass patronage. One important priority would be public education and awareness to make the demand for health services better informed. Mitigation should be made for areas which are under-prioritised by the patronage system, for example through ensuring that NGOs focus service delivery on areas with low political priority.

d. Programmes could limit downsides through making gifts selectively available – for example, on issues where citizen demand is more likely to coincide with good medical advice, and by making the volume of gifts available proportional to the burden of disease or magnitude of the problem.

e. IDPs may want to limit their exposure to risk in such a programme through focusing on impact. Although it may often involve a ‘second best’ response to problems, the nature of handouts means they are suitable for conducting highly rigorous impact evaluations, which would establish improvement in health outcomes attributable to the programme, with a high level of certainty. Full randomised control trials are unlikely to be possible given the (required) lack of control over disbursement; however a variety of quasi-experimental methods should still be able to establish the value of the programme beyond reasonable doubt.

2. It should be recognised that medium- to long-term prospects for sustainability and effectiveness in the sector hinge on whether greater political ownership by the Cambodian government(15) can be built over health service delivery.

a. IDPs should formulate a basic theory of change and some principles and assumptions relevant to Cambodian context about how political ownership can be built in the sector. From that, they should identify strategic entry points or issues on which it is acceptable for them to work, or where their programmes can in some way contribute to health sector programming.

b. Some plausible elements of such a theory could be: increasing the extent to which the CPP sees health as a viable ‘gift’; raising awareness about health ‘gifts’ building expectations for the Government to deliver on the part of Cambodian citizens; increasing the perceived importance of health by key levels of government and the general public; supporting the ability of government to systematically manage and deliver services and health outcomes.

c. As well as potentially targeting programme support around a top-down ‘gift-giving’ dynamic, the other major entry point is the ongoing decentralisation reform, and the way the health system joins up with local government.

d. Goals around government ownership are as important, if not more so, as ‘good governance’ and fiduciary issues, which should be approached with pragmatism (‘good enough governance’ may be the most appropriate mantra). It is likely that successful, visible delivery of health services, combined with an increasingly healthy and able population (over a demographic timescale), are much more likely to lead to long-term transformation, not just in human development indicators, but in the ability and willingness for Cambodians to hold their government to account.

e. Support could work better and donors’ political risk could be more easily managed if programmes revolved around strong outcomes and impact goals, and were realistic and flexible about how these were achieved. The health sector is lucky to be suited to objective assessments of needs and of the impact of programming, and programme design efforts should draw on impact evaluation expertise from an early stage.

b. In the authors’ opinion, a realistic approach would jettison any hopes of making inroads to broader systemic trends around rent-seeking or issues around politics and accountability, from what is a marginal sector. It should recognise the fact that these issues are comparatively small in health, compared to other sectors. It would also understand the limits of technocratic governance and accountability reforms pushed by external actors in the absence of any strong domestic demand for this in the near future, or stronger government ownership of effectiveness in health.

c. Rent-seeking and corruption can be tackled in the sector, but a flexible, opportunistic and responsive approach is needed. Rather than making a series of non-negotiable demands and conditions, IDPs could prepare to change focus if it appears that vested interests and behind-the-scenes deals block the way in one area. Achievable institutional and governance goals are incremental rather than idealistic, recognising the likelihood of policies which appear ‘perfect’ on paper but lack resonance in local context.

d. An ‘outcomes-based’ funding mechanism could put in place a beneficial incentive for reforms, given the importance of donor funding to the sector. A menu of desired changes could be laid out with associated budgetary tranches to be released in response to not only policy changes but actual indicators of outcomes and behaviour change. This could be used as one tool for donor coordination, with different partners assigning different levels of funding to different options, according to their own priorities and fiduciary risk tolerance.

4. IDPs should improve financial support for building a sustainable model for evidence-informed policymaking in the sector. This could help deepen and embed the required capacities, practices and structures of professional sector management, to go along with (hoped for) increases in government ownership and funding. This could revolve around three main elements:

END_OF_DOCUMENT_TOKEN_TO_BE_REPLACED

Posted in Leadership, Politics, Researches, Social | Comments Off on Building political ownership and technical leadership Decision-making, political economy and knowledge use in the health sector in Cambodia
Tags: Leadership in Health Sector