In America, where many former CNRP officials now find themselves in exile, members of each clique have shared platforms and speaking engagements. 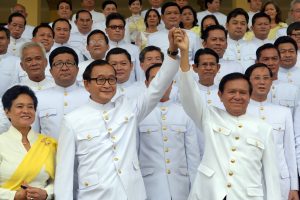 Sam Rainsy and Kem Sokha have become figure of change against the status-quo of Hun Sen. The perpetual attempts of Hun Sen to divide them both has been in vain that leading to Hun Sen’s aggressive paranoia to dissolve this party. The author must comprehend this moment that from what Hun Sen did in dissolving the CNRP, the unity and awareness have become greater and sounder in directing this force to bring back Cambodia’s democracy, rule of laws, justice, wealth share fairness, social trust, and sustainable development.

“Is the spirit of the CNRP still alive? Of course it’s still alive. The CNRM intends to be a placeholder for when the CNRP is reconstituted,” says Sophal Ear, associate professor of diplomacy and world affairs at Occidental College at Los Angeles.

The Cambodia National Rescue Party – North America (CNRP-NA), composed of chapters from different American states, was formed after the HRP and SRP merged in 2012. It was formerly the SRP-NA.

But, in 2014, a number of members and state chapters, supposedly those loyal to the HRP, broke away to create the CNRP-USA. Today, this group appears to have remained loyal to those who want to remain under the CNRP banner.

But Phan Prak, a representative of the CNRP-USA, says the organization “is not against the CNRM nor have we ever supported it. The CNRP-USA respects an individual to exercise their rights to join any organizations as they wish.”

While there are attempts by government-aligned media to portray divisions within the opposition as a sign of its feebleness, another interpretation is that internal disputes ought to be welcomed in any pro-democracy party or movement.

Indeed, a positive reading of current events is that voices ignored in the past are now being allowed to air their thoughts and grievances. Some political analysts think this is an opportunity for a younger generation of opposition figures to emerge.

There are some indications that is happening. Kem Sokha’s eldest daughter, Kem Monovithya, 36, has been one of the most active and vocal figures, meeting with US senators last month and Japanese officials last week. She declined to comment for this article.

At the same time, analysts say there is the danger that if infighting continues there will only be one winner: Hun Sen. If fissures go unresolved then it would be the “nail in the coffin of the one formula that seemed to work: the creation of a unified opposition,” says academic Sophal Ear.

Continue to read this article in Asia Times…