News collection on Cambodia election as of today 12 July 2018

PHNOM PENH, Cambodia — It’s election season in Cambodia, and the fireflies are out. 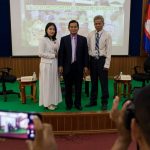 Loung Chengda, left, of the Khmer Republican Party, and In Chhaom, right, of the Cambodian Light Party, at a June campaign debate with Kin Phea, the moderator. Twenty parties will be on the ballot in the July 29 national election, but Mr. Hun Sen’s is the only one most voters have heard of.CreditAmanda Mustard for The New York Times

Cambodians use that term — “ampil ampik,” in the Khmer language — to refer to little-known political parties that flash onto the scene shortly before an election, then fade back into obscurity.

Twenty parties, some just a few months old, will be on the ballot when national elections are held this month. But most voters will have heard of only one: the Cambodian People’s Party, led by Hun Sen, the authoritarian prime minister.

Mr. Hun Sen has had no viable opposition since November, when the Cambodia National Rescue Party — which almost won the 2013 election — was dissolved by a court packed with his loyalists. The United Nations special rapporteur on Cambodia, Rhona Smith, and numerous rights groups have said the July 29 vote will not be legitimate.

In response, the government points to such obscure entities as the Dharmacracy Party, the Khmer Will Party and the New Light Party (whose platform is to promote “Cambodia’s natural, linguistic and alphabetical wonders”).

The question many Cambodians are asking themselves ahead of this month’s general election is not so much which party to vote for but instead whether they should vote at all.

It’s all but certain that the ruling Cambodian People’s Party (CPP) will win the election to be held on July 29 as its only viable rival, the Cambodia National Rescue Party (CNRP), was dissolved by court order several months ago.

But if the CNRP has its way through a so-called “clean finger” boycott campaign, the election result will lack legitimacy at home and abroad due to a low voter turnout.

In November, the Supreme Court ruled to disband the CNRP after it was accused of trying to foment a “color revolution” aimed at toppling Prime Minister Hun Sen’s CPP-led government.

Most of the CNRP’s politicians who were banned from politics for five years on court order have since fled the country while its president, Kem Sokha, languishes in prison on what are widely viewed as trumped up treason charges.

The emails were believable. An interview request for a member of the opposition. An article sent to a government official. A conference invitation for a journalist. But each one a hacking attempt designed to lure the recipient.

Over the past few months, numerous rights groups, reporters and Cambodia observers have reported seeing a large spike in phishing messages and hacking attempts. Now a report from a leading U.S. cybersecurity firm suggests such cases may be linked to a large scale operation from a Chinese cyber espionage group seeking to monitor the country’s upcoming and contentious July 29 national elections.

In a report released Wednesday, FireEye details how a well-known Chinese hacking group called TEMP.Periscope targeted opposition figures, government departments, rights defenders and media outlets. Among those compromised by the attacks was the Cambodian National Election Commission, Interior Ministry, diplomats and opposition lawmakers. In the past, the group has gone after corporations, academics and defense contractors in the U.S., Europe, Taiwan and Hong Kong. FireEye, which has been studying TEMP.Periscope since 2013, said there can be little doubt they are working on behalf of the Chinese government.

“The evidence we have gets us as far as information gathering, it definitely shows that China is very interested in the upcoming elections,” Benjamin Read, Senior Manager for Cyber Espionage Analysis at FireEye, tells TIME.

China is a close ally of Cambodia, and has invested billions in infrastructure, development, military support and aid. “Any upheaval in Cambodia would be an issue for China considering their close partnership,” says Read, pointing to the recent election in Malaysia — in which the surprise outcome has caused a headache for Beijing with billions of dollars in infrastructure and construction contracts now being reevaluated.

Such an outcome is unlikely in Cambodia, where the government last year dissolved its only viable political competition, the Cambodia National Rescue Party, and imprisoned its leader Kem Sokha. But the surveillance nevertheless highlights China’s deep interest in the inner workings of both friends and foes.