On July 22, 2018, The Irrawaddy published a news on corruption among the arm-force elites, adding to “Cambodia’s Dirty Dozens” by HRW and recently translated by VOA into Khmer, The Irrawaddy pinpointed the closest link of General Pol Saroeun in millions of mining corporation. Tax evasion and hiding conflict of interests are most important that the General has been conducting in Cambodia.

The Paradise Papers reveal that Uddor Meanchey Mining was set up in the Cayman Islands to play a key role in what could have been a multimillion dollar project to turn Sidara’s coal mine into the main supplier of a planned power plant that would sell electricity to Cambodia, Thailand and back to the mine to keep it running.

The leaked records, reviewed by The Irrawaddy, include emails and documents ranging from share purchase and transfer agreements to certificates of incorporation, directors resolutions, legal opinions, checklists, client lists and invoices — all prepared by or shared with the offshore law firm Appleby.

According to the records, a joint development agreement setting the project in motion was struck in June 2007. The partners included two Cambodian companies, EuroAsia Power and Rexwell Engineering Cambodia; another Caymans firm, AEI Asia; and Rexwell Engineering Limited, registered in Guernsey, a British crown dependency in the English Channel with its own reputation as a tax haven. Appleby was AEI’s legal counsel.

The plans called for Sidara to transfer the license for her coal mine to EuroAsia Power, which she also held shares in, according to the Cambodian Commerce Ministry’s business register. EuroAsia Power would then dig up and ship the coal to a 2,400-MW power plant to be built, owned and operated by Rexwell Engineering Cambodia near the mine.

The two Cambodian companies would operate as subsidiaries of holding companies set up in the Cayman Islands.

Among the directors both Uddor Meanchey holding companies appointed was the affiliate of another Guernsey firm, the Sarnia Management Corporation.

On its website, Sarnia Management offers to help “wealthy individuals and their families with flexible and bespoke approaches to protect and manage their assets” with the aid of “jurisdictions and relationships all around the world.” The 2016 Panama Papers, an earlier leak of offshore financial records, named Sarnia Management as an intermediary for more than 200 offshore companies, many of them registered in Niue, a pebble of an island state in the middle of the Pacific Ocean with — like the Caymans — zero tax on offshore earnings.

The records don’t say how much the project partners expected the coal mine and power plant to cost, let alone earn. But they budgeted nearly $10 million for advisors on the power plant alone.

It appears their grand plans soon fell apart, however. In June 2008, only a year after the joint development agreement was signed, AEI Asia told its partners it 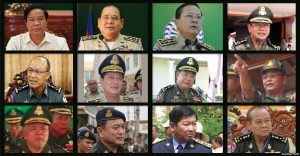 would be terminating the deal.

But the two offshore holding companies lived on a while longer. Uddor Meanchey Mining, the one Sidara owned shares in, was dissolved only in 2012, five years after it was registered in the Caymans. Rexwell Engineering Limited was dissolved the same year in Guernsey, and AEI Asia appears to have been wound down as well.

Continue to read in details by The Irawaddy…

Author: Astrid Norén-Nilsson, Lund UniversityNext week’s Cambodian election is not a contest between parties — it is a vote on the legitimacy of the election itself. With the main opposition Cambodia National Rescue Party (CNRP) dissolved by court order just eight months ahead of the election, the incumbent Cambodian People’s Party (CPP) faces no real challenger.The CNRP has called for a voter boycott, which has turned the election into a referendum over its own legitimacy. The CPP has declared illegal the act of publicly calling for a voter boycott (or even proclaiming one’s intention to abstain), creating confusion among citizens whether voting abstention itself could be judged illegal.

A high voter turnout would smooth Cambodian Prime Minister Hun Sen’s path to establishing a new authoritarian order. The government has indicated that it is set on achieving a voter turnout of over 80 per cent, which would be far higher than the record low 68 per cent turnout at the last national election in 2013. A high turnout would make the creation of a new national narrative that relegates the CNRP to history a more feasible project. The election could be cited as proof that the nation has come together to express support for the CPP’s resolute derailing of a ‘colour revolution’ in the making.

Yet a high voter turnout is not strictly necessary for the administration’s stability or even likely to impact on its future policy direction. The government’s efforts to ensure a high turnout are in the first place intended to secure the appearance of legitimacy, rather than  to win the people’s hearts and minds.

Once the legitimacy of the new government is publicly unchallengeable, there will likely be efforts to genuinely deepen popular support by tying continued CPP rule and its thwarting of alleged (foreign-backed) revolution to national pride. This would go hand-in-hand with the government’s successful efforts to take politics out of the equation in terms of citizens’ thoughts about their futures: having had their political awakening eclipsed, Cambodia’s urban youth are steering away from politics towards business and entrepreneurship instead.

In the final analysis, it is the act of holding an election rather than the turnout that matters. The election will sanction Hun Sen’s continued hold on power, and the government will construe this victory as a new chapter in the country’s political development after the demise of the political opposition. Though there may be a slight softening of political repression after the election, this will likely not be felt so much by the media and civil society. Since the election will mainly serve to establish a definite ‘before’ and ‘after’, the administration will need to defend the ‘new normal’ that the election ushers in. The fact that former CNRP voters have been bypassed by the election leaves too many issues unresolved for the government to soften its stance substantially.

Meanwhile, a militarisation of the National Assembly prepares for military oversight over policy. The government will continue to court key constituencies previously singled out by the CNRP (such as garment workers, civil servants and the armed forces) with favourable economic policies such as incremental salary raises. As for foreign policy, Cambodia will likely continue its roaring pivot to China and Russia, unperturbed by the election’s lack of recognition by the international community (the European Union and the United States have already proclaimed that, without the CNRP’s participation, the election will not be considered legitimate).

The holding of the election and its outcome may be written in stone, but exactly how it fits into the democratic backsliding of the country is still being sculpted. Multi-party elections will by all appearances remain important in Cambodia beyond 2018, but from now on the fireflies (small, insignificant parties that crop up around election time) may buzz more loudly. The notion of multi-party democracy, embodied by the procedural spectacle of elections, has rooted itself deeply in Cambodia.

At the same time, the government intermittently flirts with the notion of one-party rule, such as when Hun Sen publicly reflected in June that one-party states such as China and Vietnam also let the private sector lead national development. After Cambodia’s government turns the page on 29 July, it may increasingly allude to the merits of de facto one-party rule while continuing to fervently protect the formalities of multi-party democracy.

“We have never banned criticisms but we ban insults and incitements because in an election situation, people need security physically and mentally,” government spokesman Phay Siphan said.

Hun Sen, who has ruled this Southeast Asian nation for over 30 years, has had virtually no opposition since November when the opposition Cambodia National Rescue Party (CNRP) was dissolved by the Supreme Court at his government’s request. CNRP was narrowly defeated in a 2013 general election.

Amid condemnation from the international community, CNRP leader Kem Sokha was jailed last year on treason charges and almost 5,000 local authority positions his party had won were handed to members of the ruling Cambodian People’s Party (CPP).

“Inside the country, (CNRP members) are completely cut-off from communicating with each other,” 30-year-old Khoeun Virath told Reuters at a cafe in Phnom Penh in what was once his constituency. “There is no leadership structure left.”

The National Election Committee (NEC) says it has approved 69 individual foreign observers, but doesn’t provide the number of institutions.

It has registered 107 domestic groups, which will be dominated by the Union of Youth Federations of Cambodia (UYFC), an organization led by Hun Many, the prime minister’s son and a lawmaker for the ruling Cambodian People’s Party (CPP).

A total of 36,000 members of the UYFC had been registered, said Huy Vannak, a member of the youth organization’s central committee and undersecretary of state for the Interior Ministry. The group will contribute almost half of the 77,534 monitors.

Dim Sovannarom, a spokesman for the NEC, confirmed that “tens of thousands” of the UYFC’s members had been ratified as election observers. UYFC provided election monitors in past polls but not on this scale.

Continue to read in details Reuters…

WHO PROFITS FROM THE DEATH OF CAMBODIA’S DEMOCRACY?

Continue to read in details at Global Wintess…

Hang Vitou, president of the Young Analysts Group, said the ruling party’s victory was a sure bet and estimated that the CPP would win 95 to 120 of the 125 seats in the National Assembly.

Still, Hun Sen’s party continued to campaign out of both genuine and insincere fear, Vitou said.

“They are afraid that many people will not go to vote,” he said, estimating that most supporters of the CNRP would not cast ballots.

Without the CNRP, the ruling party needed to give the impression that it feared losing to other parties, Vitou added.

The CPP “pretend to be afraid but in fact they are not afraid because they know the result already,” he said.