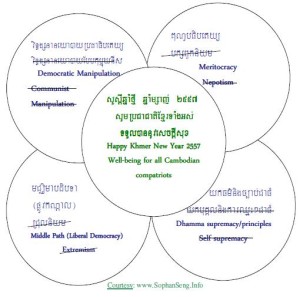 I don’t think the strategy of “divide and conquer” would be applicable in our modern century. It possibly boomerangs!

Political leadership in Cambodia has been embedded by old style of communist manipulation, nepotism (no meritocracy), extremism and self or personal cult.

Abraham Kaplan said “politics is the redistribution of bandits.” Political scientist prof. Gergen said “a politician is a person who projects, motivates and rationalises the public for personal gain.” This manuscript is clearly illustrating the political game of “manipulations” but there is different between communist style of manipulation and democratic style of manipulation. While we are condemning KR of revolutionary communist, the arrival of Vietnamese’s regime is pure socialist communist. Both legacy and inheritance are still co-existing in Cambodian society nowadays.

For democratic-based manipulation, all games are educational and creating good heritage for younger generations. For communist-based manipulation, they can do whatsoever to defeat their contender(s) regardless of bad or unproductive outcomes. Within this prospect, Sam Rainsy who exercised his rights to protect Cambodia territory should not be criminalized. And the action should not be used to marginalize his political career. His absence is not good at all for Cambodia while this country is heading to develop democracy.

Secondly, will Cambodia be able to see the brighter and younger generations whom are not communist-made politicians?

While many elder Cambodian politicians are communist-made entities, we are expecting new young generations with bright vision to take over the job. But if they are just the offspring(s) from both CPP and SRP (or NRP) like we have discussed above (and I totally support nepotism-free and meritocracy-recipe of Dr. Lao Mong Hay), should Cambodia enjoy the recipe of meritocracy or good-Kamma individuals like Buddha taught?.

Cambodia has good laws to bolster meritocracy but why Cambodian people cannot implement it?

Thirdly, since the liberation from French, Cambodia has been flooded by the ideology of extremism. We said KR was so extreme, but we must observe the mentality and ideology that KR imitated from?. Cambodia is a Buddhist state, middle path should be concerned in this country. History is the lesson for Cambodia. For the KR regime, we cannot forget it but we can forgive it in order to embrace new life and new way of doing work. However, I don’t see these things have evolved in Cambodia. Government-led party and opposition party are still playing political game of confrontation, enemy and friend, winner and loser, dog and cat etc. Does Cambodia need to work out the revolutionary again or let everyone embrace the good settlement of the existing rule of laws?

Fourthly, the political culture of personal cult has captured all prospects of society. Counting from attitude of parents who regard their children as they are made by them; those children are treated by force and violence. Family violence is omnipresently everywhere. Teachers are holding pedagogy of teacher-centered approach because they are regarding their students as objective, not subjective. Politicians are self-oriented leaders, not principle-oriented leaders at all. Those political leaders are still holding strong opinion and behavior of looking at the people as their followers, objectives or slaves in some perspective.

When Cambodian people can retrieve the attitude of looking at Dhamma or principle as their supremacy?

This upcoming Cambodian New Year, I wish all Cambodian people and Cambodian politicians change the above four disadvantaged perspectives by embracing new productive perspectives. The change of paradigm shifts in Cambodia is in need, and it requires perseverance to achieve it as change is somewhat been very resisted.