Youths and the politics in Cambodia

Youths have been worldwide recognized as the young shoot of the bamboo. Youths are the strongest force in society to shape, change and improve society in which they are residing with. Cambodia at the present has been outstandingly emerging youth bulk in which under age of 25 years old is representing majority of Cambodia’s 14 millions population. Those youths are actively working to sustain their family economy. Their bulks are crowding at the garment factories, migrations to work outside Cambodia, educational institutes and rice paddies.

After googling about Cambodian youths and their participation with the politics, I found these three phenomenon extremely speak something differently from that traditional thought.

1. Watching video clip on “Next Generation Program or កម្មវិធីអ្នកបន្តវេន”, many speakers spoke proudly on the collective effort to tackle lingering issues challenging Cambodia such as life improvement, justice, human rights, equity, democracy and political participation etc. The program is sponsored by USAID, and the last 10th episode was voted by SMS by the audience, the winners are represented by those four selected candidates. Remarkably, Mr. Hing Soksan, a youth from Cambodia National Rescue Party (CNRP) won landslide of the 1105 votes in total.

From this result, I wish to compare it with the release of poll survey conducted by the International Republican Institute (IRI) on January-February 2013 in which the Ruling Party or Cambodian People Party (CPP) and opposition party or Cambodia National Rescue Party (CNRP) each has their own interpretation on the result of the poll. Note that, in Cambodia we have never had independent poll on the popularity of each rival political party in each national election. For other countries, polls have played important role on the change of vote popularity and it could predict the winner efficiently. Hence, the sampling strategy is in the state of error, and the survey result has likely been skewed by: one-sided or dominant mass media controlled by the ruling party, respondents’past trauma, scary mindset of the people in involving with the political affair, and the level of education etc. Cambodian people have been traumatized by the killing field, foreign occupation, civil war and intractable injustice of the court system in this country. Each Cambodian is hardly disclosing their favor or disfavor towards political parties or political figures.

The IRI collected sampling randomly and dispatched its workers to interview verbally with the target population. The question on “Is Cambodia generally heading in the right direction or the wrong direction?” is indicating as the intimidating questionnaire for the interviewee to disclose their opinion to the public. They are scared of their freedom would be used by the interviewer(s) or worker(s) as it possibly could become reprisal for their life, family and daily activities. The result shows that 81% responded as the country is heading the right direction or 1578 respondents, and 21% or 413 respondents said the country is heading in the wrong direction. 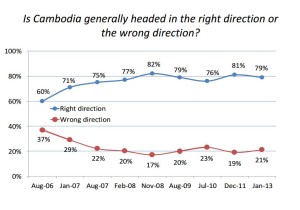 In conclusion, the way of polling can be taken in different approaches. The survey of more than 2000 respondents randomly selected and the SMS on the political debate of youths from both the CPP and CNRP are also considering a polling. With this matter, the sending SMS helped the respondents to be worry free contradicting to the direct contact which give them strong belief on bad consequences. The outcome produced differently and yes this comparison is also in the stage of skewing as well.

2. The Cambodian youths of their virtual life throughout Cambodia have expressed their political opinion very different from youths who are having and using their accounts on facebook. Last time, I observed on the youth bulk actively engaged in political debate in facebook in responding to the group of students protested the presence of Prof. Dr. Surya Subedi, the special envoy and rapporteur of the UNs in Cambodia and my article was posted on ki-media outlet which I read the comments very interestingly.

Further to the facebook movement, many youths have appeared to show their actual face, actual voice and actual genuine love in their country. Their voice for change has been constantly speaking out loud. Their voice for political involvement for a better Cambodia has been shouted loudly from the stream. Their voice for their better future, their inquiries and the responsibility they must bear on their shoulder as the young shoot of the bamboo of this nation has been indicating publicly and clearly. 3. Recent visit of Sam Rainsy, the exile well-known politician of Cambodia and the president of CNRP at Seoul of South Korea has suppressed my thought on youth voice in comparing their habit inside the country and outside the country. While those youths are living in Cambodia, they behaved silently or moderately on the issues relating to the politic. This illustrates something true about Cambodian youths who are living inside Cambodia that their inner heart is not silent on things injusticely happening around them; but they might not be able to speak out as the surrounding environment is not open or giving them prowess to speak out of their concern. The youths inside the country are possibly clouded by fear and unsafe feeling in using their freedom to involve with the politic. But when they are out of the country, majority of those youths dear to speak out loudly and express themselves without limit on the concern of political movement, political culture, political economy and political change for a better future.

These three observations illustrate optimistic on Cambodian youths who are the young blood, successors and the young lineage of their ancestors, the builders of Angkor Watt the Great, will never succumb or surrender to political threat, injustice, ill treatment, long life learning, hard working, relentless exploring for change, and struggling for justice etc.

Spread the love
Posted in Leadership, Politics, Social | Comments Off on Youths and the politics in Cambodia
Tags: Cambodian Youths, Khmer Youths