NEC is the bridge but plays its role towards destruction 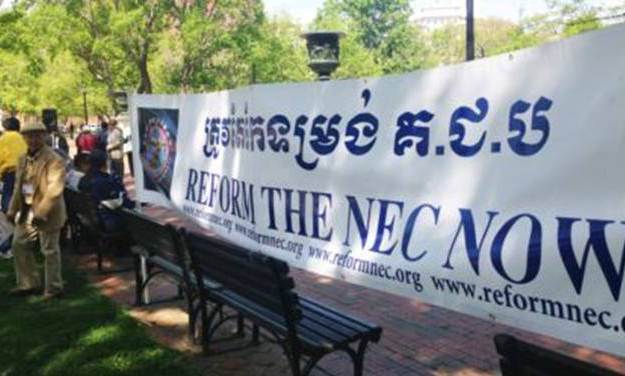 At the moment, we can see clearly that the powerful ruling party is playing procrastinating game and no political will of reform or following the recommendation of the Special Rapporteur at all.
This election is a gross loss at its legitimacy as NEC has been increasingly summing up bad credit among the electorates and international communities. Hence, this body has been fully protected by the ruling party. We can see the mass and the will of the Cambodian electorates are the winner over this loser system. With this imbalanced existing scenario sufficiently create fragile bottom up power and can lead to destruction and instability of this nation. Political scientists can not pre-calculate on the magnitude of crisis caused by this ineffective bridge: the strong bottom up power with the upper ineffective system. If crisis occurred, the CNRP is not the responsible party while this party is working hard to accommodate itself with the bottom up power and to organize their spirit within an order movement. But if the institution power and its system is continuing to ignore this power, or without comprehending this power, or working to cope this power by force; the unprecedented crisis is tangibly intolerable.
By national and international law, CNRP has relevant demand on the creation of a credential commission to investigate the election irregularities as well as to pave way for future confidence of this national bridging committee. There is a professional move by changing from proposing UNs as the referee to be an investigative member. I think this is a provision to avoid tension which I don’t see from another side. In contrast, the mobilization of the military with heavy ammunition is a sign of doing a job that is not described in the job description and it is a sign of tension.
At the meantime, Cambodian people are learning the value of democracy and we can testify this by the ballots they voted on July 28, 2013; but the ruling party is still delivering the same messages, the messages of using armed force for national security, unity and sovereignty. This message is again stated by government spokesperson with Hello VOA today (August 12, 2013). While NEC was heavily criticized since its inception and it is requested for reform by both Cambodian people and the international communities, the ruling party is not only being so protective to the NEC but also exposing itself as the secure shield to protect this body at all cost.
It is time for the ruling party to use the armed force in the way of democracy principle and stop protecting the rotten fish in order to freshen the whole fish and embark Cambodia in a safe haven.
END_OF_DOCUMENT_TOKEN_TO_BE_REPLACED
Spread the love

Posted in Leadership, Politics | Comments Off on NEC is the bridge but plays its role towards destruction
Tags: Cambodia election, Election Watch, NEC