I am interested to read more books on “violence” in Cambodia. Since, I was born I can say violence is everywhere and it is man made. The trauma of Cambodian people caused by violence is very tremendous. The victim of the violence is the weak, not the strong. In contrast, the strong gain benefit from violence embroilment as this projected violence is systematic.

Sometime, violence has been shaped itself from time to time. For instance, the Khmer Rouge leaders were great in using violence to control others and enhance their power. But their extremism ended their career faster than expect. The same Khmer Rouge comrades have likely maintained their power base but changed the images of violence, at least academics see this as changing from “direct” to “indirect” violence embroilment. With this synthesis, well-known authors on Cambodia such as David Chandler, Penny Edwards, Gafar Peang-meth, Sorpong Peou, John Tully, and Sebestian Strango have simultaneously theorized Cambodia politics as lineage political culture of violence built by violence leadership.

While the UNTAC-sponsored election in 1993 was not violence free, the post-established government was violently divorced from each other through a deadly coup detat. Subsequently, many protesters were injured, amputated and killed by the grenade attack and security guards deployed by the government; and many movie stars and journalists are day-light shooting including extrajudicial killing. Those perpetrators have never been brought to justice. Sebestian observed that the repression on opposition party through violence orchestration and court-ordered charges have been traditionally trumped-up by the CPP under Hun Sen leadership.

We have condemned the Khmer Rouge for their leadership to kill the educated, the high classes, the urban and the wearing eyeglasses people, but now the authority under Hun Sen leadership, they can handcuff representatives who are voted by the hundred thousands of people and bearing parliamentary protection without having due course of impartial investigation. This practice is absolutely Khmer Rouge-minded behavior. Observers said that Ho Chi Minh who fought against the Southern Vietnamese comrades didn’t handcuff, or jail, but extradited hundred thousands of arrested doctors, high ranking politicians and educators who were opposing him to third world countries for political asylum. More than this, Burmese junta only arrested in house detention of Aung San Suu Kyi because she had the protection as member of parliament as well as she is the representative of the hundred thousands Burmese people. Revolutionist Hun Sen publicly stated on creating third hand groups to fight against all types of demonstration. The revolutionist Cheang Vun recently said through the media that those arrested MPs-elect of CNRP are anarchic or strayed people, also revolutionist Cheam Yeap said Sam Rainsy and Kem Sokha must untie their chicken to join the parliament. All these physical and verbal abuses are speechless for all of us as younger Cambodians.

Now, the question come to our mind that has the Khmer Rouge leadership been disappeared from Cambodian society? Or this Khmer Rouge regime has just transferred as a tool for post-Khmer Rouge leaders to utilize it for their leverage of violence leadership? The question continue to ask all of us that could our trauma be healed when images of the Khmer Rouge such as wall drawings, school curriculum, documenting, trial on crime of humanity, and public political rhetoric etc., are used to justify for violence leverage solely? 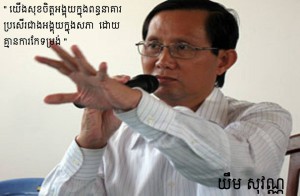 As I have concerned with the leadership development through “violence”, “agony”, or “adversary” situation, I am stunt by the past to present violence in Cambodia. The experienced violence leaders of their baby boomer generation have never been reluctant in using violence to defeat their contenders. Since, the impasse of election result in July 28, 2013, the powerful government led by Hun Sen has repeatedly warned about the cracking down or using third hand group to confront with all types of mass power. The CNRP which is the biggest opposition party has never been reluctant to use non-violent mass to bring about genuine democracy, social justice and economic equity. The two are considered as pragmatists and revolutionists by character and conduct. Many post-baby boomers of Cambodia or youths who are representing 70% of Cambodian population are realistic pragmatists. The arrest and detention of CNRP MPs-elect this time is reported as an attempt to renew violence-based leadership orchestrated by the group of revolutionists. While pragmatist Yim Sovann said he and his team accept to live in jail rather than to join the assembly without having proper in-dept reform (see photo attached), both revolutionist Chheang Vun and Cheam Yeab stereotyped those MPs-elect as anarchic and chicken that they must be untied to join the parliament.

Watching the onsite photos and video clips, the private security guards swarmed in to open attack first. The likely strangers or third hand men walked through the demonstrators’ crowd opened counter-strike attack, and following by sympathizers pushing back the military of black shirt security guards. That one strange man or possible third hand man walked through different scenes: once hit the security guard, once hit the demonstrator, and another occasion he helped protect the fallen security guard (see clip by Licado). The scene shows many of them are bleeding, running for safety and changing their cloths to avoid further beating. This scene is the losing scenario for all Cambodian people and their nation. The Cambodian top leaders including members of parliament, government spokespersons and municipal governor have colored their own people as right and wrong fraction, or assign blame to the violence in the intention of linking it to MPs-elect leaders of the opposition on charges of felony act. This culture of coloring and assigning blame has resulted in impunity and life of Cambodian people is at the yoke of powerful incumbent’s selectively favor.  We are doubtful that why the actual perpetrators are not engaged by the legal investigators to be arrested, or the irresponsibility and negligence of the national police armed force who were dispatched to protect the onsite demonstration are not enforced? This is perhaps a systematic state-sponsored violence and everyone is just the scapegoat or just the chess for a Cambodian super player.
Spread the love
Posted in Culture, Education, Leadership, Politics, Researches | Comments Off on Political Analysis on Cambodia Political Culture of Violence: Revolutionists VS Pragmatists