This above Khmer popular saying is suite well with the context and functionality of the Paris Peace Agreement. During the negotiation processes, within the successful written agreement, and post-Paris Peace Agreement implementation, we are stunned by the terms “national reconciliation”, “unity”, “solidarity”, “conflict resolution”, “comprehensive peace settlement”, and “dialogue or negotiation” etc.

Now, it is time for Cambodia politics to update itself to compete with the global change. Confrontational strategy has been changed to diplomatic policy and negotiation. The new paradigm shift has transformed itself more complex and intricate – human subconsciousness to free themselves from all sufferings.

The Paris Peace Agreement is the blueprint for Cambodian politicians to put aside egoistic behavior by embracing principles and democratic value. Each party must be able to simply distinguish between the self and the nation clearly. Under this spirit, the PPA urges every politician especially the law-maker must stop lie their own constituents. 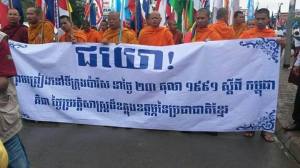 I have a dream to see Khmer leaders can work together, can speak the language of nation building together with honest sub-conscience. When I was young, I cried because of hurting; but when I am grown up, I cried because I was overwhelmingly affected by bliss and joy. I remember the cry I made when watching the yellow robe army of Dhamma Yietra led Maha Ghosananda walked through the National Road No. 6. There were Japanese Mahayana monks preceded in the front with drums, gongs and strange chanting unusual to my ears. Parading after were hundred thousands of Cambodian Buddhist monks, with following white clothing nuns and laymen/laywomen. I was called to bring a bucket of water for water sprinkling on the edge of the road by the monks. Many drops of water fell unto my head with the word Peace and National Reconciliation deeply penetrated into my brain.

That memorable moment has never been disappeared from my head.

This year marks 23 years anniversary of the Paris Peace Agreement, I see more commemorative organizings by the Cambodian political parties, NGOs, activists and general citizens in both inside and outside country more than any years I have been witnessing. Thousands of youths, land activists and Buddhist monks are parading around the Phnom Penh city with petitions handed over to Co-Chairmen of the PPA: Indonesia and France.

The most significant sign is the evolving of Cambodia politics into two party system: CNRP & CPP; which is a good component for the concept of Mutual Understanding, National Reconciliation, and Comprehensive National Building Endeavor. Hence, those terms and efforts should not be the propaganda. Mutual understanding and national reconciliation shall happen only through the Rule of Law and Professionalism.

For the Sake of the Nation, These Two Parties must be able to Take Turn in Serving the Nation, like many civilized countries around the World have been Experiencing.

I would like to END my writing on PPA as of today. Below is the Movie Clips of “One Evening after the War” filmed by Social Engineering Rithy Panh.

“Peouv is recalling about the her story and the Three Unfortunate Disarming Soldier.”

“Srey Poeu is saddening about the social gap and injustice in Cambodian society, and her true love with Sovanna.”

“Srey Peouv is entrapped as Sex Worker or Srey Bar in Phnom Penh after she was sold to the brothel for $1400 dollars. She cannot make a family life with Sovanna with this dept.”

“At the end, Sovanna was shot by Maly, his friend, left Srey Peouv with Bophana, their daughter. Srey Peou is still a Sex Worker in Phnom Penh.”