Blogger’s Comment: The Age of Enlightenment (យុគនៃការត្រាស់ដឹង) emerged with the creation of the United Nations (UNs) to safeguard the world from annihilation and destruction. While the UNs have been twisted by each powerful country for their own gain, the effort to bring about just, impunity and peace is also unstoppable. When I was young, I heard a lot about the legend and fairy story of angel and devil, good and bad, Eisey and Eiso etc. This political myth has forever existed in our earth. UNs have been created to symbolize the good actor in which global citizens have embraced. The ICC has experienced huge challenges to convict the accused although its jurisdiction is prevalent. Since the creation of the ICC, not many events that this world’s court of justice has been successful. But as said, the Khmer proverb keeps reminding us: “ជង់មិនដែលភ្លេចកុក តែកុកទេដែលរមែងភ្លេចជង់ or snare has never forgotten the heron bird, but the heron bird itself has always forgotten the snare”. 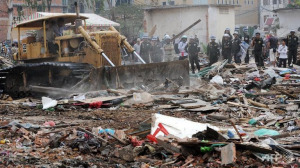 PHOTOS
Cambodian military police stand guard as a bulldozer clears the Borei Keila community after the forced eviction of residents from a slum village in the centre of Phnom Penh on Jan 4, 2012. (AFP/Tang Chhin Sothy)

ENLARGECAPTION
THE HAGUE: Victims of land grabs by Cambodia’s “ruling elite” called on Tuesday (Oct 7) for the International Criminal Court to probe their mass evictions as a crime against humanity. 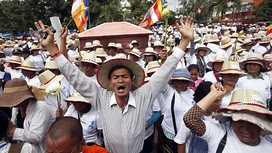 Hundreds of thousands of Cambodians have been affected as part of a “widespread and systematic attack against the civilian population, pursuant to state policy,” said a complaint to be filed at The Hague-based ICC. “The ruling elite have illegally seized and re-allocated millions of hectares of valuable land from poor Cambodians for exploitation or speculation by its members and foreign investors,” said the complaint to be filed on behalf of victims by lawyer Richard Rogers on Tuesday.