Cambodian leadership between US and China 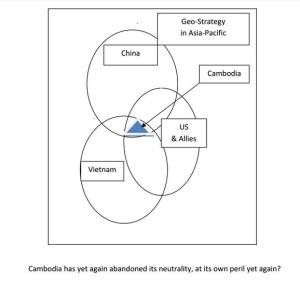 While the Vietnamese government celebrated the 40th anniversary of Vietnamese unification between North and South on this April 30, 2015, Vietnamese leaders have eloquently contained the scheme that US has separated Vietnam; those Vietnamese leaders frequently termed American as  imperialist, or American hegemony during the post cold-war. This statement coincided with the prediction that Vietnam and China shall have no space to be doubtful on their diplomacy tie dis-aligned. Historically, China is the essential partner to help Vietnam unified. And another indisputable history is the Cambodia that opened space such as Ho Chi Minh trail to help Vietnam achieve their unification goal. But what Cambodian people are wishing to see their government’s uncontested role is to encourage Vietnamese government to say “thank you” to Cambodia for their unification at the same level that present Cambodian government leadership that has always said “thank you” to Vietnam that help Cambodia to stop Khmer Rouge brutality. 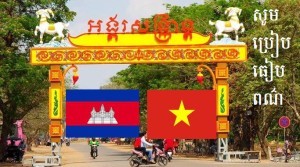 According to political ideology, peace and war history, and economic cooperation etc. Vietnam cannot distance themselves from China at all. China and Vietnam have pursued political ideology of communism and neo-Marxist capitalism. Vietnam and China fought hand to hand against Nazism and Japanese militarism; recently Vietnam and China traveled to Russia to join the 70th anniversary of the victory of the World Anti-Fascist War or WWII, and the economic cooperation especially the TPP project that Vietnam shall benefit a lot from it.

Above few findings can conclude that the Cambodia-Vietnam relations is remained strong even-though as Chair of ASEAN Cambodia reinforced its relations with China by neglecting Vietnam’s effort to instate multilateral resolution on behalf of ASEAN with China rather than bilateral one regarding the dispute on Spratly island. The assumption has also surprised everyone when Cambodia prime minister Hun Sen visited Vietnam while his leadership has been shaken by Cambodian people in 2013 election. His visiting happened during tension and protests to call him to step down; and he was publicly speaking Vietnamese to his Vietnamese audience regardless of diplomacy code of conduct he must abide by.

Below are some references of above description with their quote and link to the original complete articles and documents.

Phnom Penh cannot afford to be a Chinese proxy [3]. While China is of great economic interest to Cambodia, Vietnam is also vital to Cambodian security given the country’s geographical proximity. Balancing its foreign policy between China and Vietnam (and ASEAN as a whole) would be the wisest option for Cambodia. At the same time, the fiasco of the 2012 ASEAN summit should demonstrate to other ASEAN members the necessity of responding to the security concerns of its smaller members.

As many will recall, for the first time in its 45-year history, the ASEAN Ministerial Meeting in July 2012 failed to issue a joint communiqué [3] because of the failure of the ministers to achieve consensus on a common ASEAN position on issues involved in the South China Sea. The failure took place despite the fact that such a consensus had been worked out in the past and was again expressed in an ASEAN ministerial statement on the South China Sea a few days later. Many pointed to Chinese pressure on Cambodia as the main reason for this undeniable debacle.

The United States and ASEAN

In order to prevent Cambodia from choosing China over the US, Washington first needs to stop creating, and believing in the existence of, two distinct, contending, and mutually exclusive sides. The US should see China and Cambodia as two separate fronts. It should stop adjusting its Cambodia policy according to the level of Chinese engagement. If bilateral standoff is not the desired outcome, then trilateral cooperation is the only solution.

In 2014, Vietnam ranked 119th out of 175 countries in the Transparency International (TI) Corruption Perceptions, 126th on the World Bank’s Control of Corruption Index, and 74th on the International Country Risk’s Guide corruption rankings. Meanwhile, Vietnam’s top echelons have repeatedly warned that the country’s wealth widening wealth gap poses the most worrying threat to the survival of the political regime.

How the US continues to impact Vietnam 40 years on

The institute, established in 1999 around 80 km (50 miles) from Phnom Penh, is part of China’s rising military aid to Cambodia. Interviews with serving officers and a senior Cambodian government official shed light on how far the school’s influence has grown in recent years.

Military aid, alongside arms sales and billions of dollars of investment, have strengthened China’s ties with Cambodia, and analysts see it as part of a push to extend regional influence, including in the disputed South China Sea.

Cambodia, like neighboring Myanmar and Laos, has been a major beneficiary of Beijing’s push in recent years to cultivate ties with developing countries in Asia, Africa and Latin America. From 2006 to August 2012, Chinese companies invested more than $8.2 billion in Cambodia, besting second-placed South Korea’s $3.8 billion and the $924 million from American companies, according to the Cambodian Investment Board. Since 1992, Beijing has offered Cambodia $2.1 billion in aid and loans to fund agricultural development and the construction of more than 2,000 kilometers of roads and bridges, Chinese and Cambodian officials say.

There is no doubt that Cambodia needs China’s assistance to further its economic development. Likewise, China sees Cambodia as an important ally for exercising greater influence in Southeast Asia and counterbalancing the United States. Chinese Ambassador to Cambodia Pan Guangxue recently said that the positive relationship China and Cambodia have built over the years serves as a role model of friendship between countries of different social systems. He is convinced that, with the careful guidance of its leaders and the efforts of its people, China and Cambodia can further deepen their mutual trust for one another and improve cooperation, so as to develop the relationship to a greater level.

Chinese investment and aid in Cambodia a controversial affair

The China-Russia relationship has been fruitful in the past. During the past two years, their heads of state have met eight times, reaching a series of important consensus on bilateral cooperation in all areas.

During their meeting in May, they are expected to add new content to bilateral ties and break new ground together, showing their relationship has entered a new development phase.

China has always offered instant rewards for displays of loyalty. When the Cambodian government sent 22 Uighur refugees back to China in 2009, the United States once again suspended aid to Cambodia as a retributive measure. China, on the other hand, pledged a total of US$1.2 billion two days after the incident. This generous gesture, however, does not necessarily guarantee that the money is indeed received, as some observers caution.

But looking beyond the ‘big old friend’ rhetoric, what’s in this relationship for China? The strings attached to China’s generosity are undoubtedly strong and many-stranded.

The CPP still maintained a tight grip on power, and its leaders were wary of China given the troubling relations of the past. Only after 1997 did Cambodia-China relations began to improve. One possible explanation was that in the aftermath of the deadly clash in July 1997, it was clear that the CPP would be the dominant power in Cambodia’s politics once it had defeated and captured forces loyal to the royalist FUNCINPEC party.

This shifting balance of internal power may have made China realize that it had to revisit its past strategy and engage with the CPP’s leaders if it wanted to reinvigorate its crumbling diplomatic relations with Cambodia. As a result, China quickly emerged as one of Cambodia’s most important donors. More importantly, China’s long-standing policy of non-interference perfectly aligns with the interests of the ruling elites.

Besides financial support, China has also assisted Cambodia in strengthening its security forces, and has given millions of dollars worth of military equipment to its ally. For instance, in 2010, China agreed to give 257 military trucks and 50,000 uniforms to the Cambodian armed forces. In addition, China also provided 1,000 handguns and 50,000 bullets to the national police. These are just a few highlights of the military cooperation between the two countries.

In the aftermath of the July 2013 election, which the opposition Cambodia National Rescue Party (CNRP) claims was plagued with massive irregularities, China was among a handful of countries that endorsed the CPP’s victory. During his visit to Cambodia in August 2013, Chinese Foreign Minister Wang Yi promises the ruling elites that “China will firmly support Cambodia to prevent foreign disturbance.

This is the first time Cambodia‘s leader has openlystated his position on the South China Sea issue.Cambodia has faced criticism for its handling of thematter during a meeting of the ASEAN countries in 2012.  Hun Sen said Cambodia should not be the onlycountry criticized for continued problems in the area.

“After Cambodia, Brunei also could not find a solution;Myanmar failed as well. Now I am waiting to see ifMalaysia will be able to solve the problem,” said Hun Sen.

The military objective, in the long term, stands to make the greatest contribution to China’s national security. Cambodia sits in a critical geostrategic position, and China has since 1955 demonstrated an almost bewildering desire for access to Cambodia, whether the purpose was to counter US influence, to funnel supplies to North Vietnam and the Viet Cong, or to counter Vietnam. During the height of Sino-Cambodian relations, during the Pol Pot Khmer Rouge regime, PLA engineers supervised the slave-labor construction of an airfield at Kampong Chhnang that was (and is) capable of handling any aircraft in the world. Given that the Khmer Rouge had no air force and that the base included a command center built into a nearby mountain, the facility was clearly intended as a forward base for the PLA air force.

But in Cambodia, a small band of historians has been clamoring for Beijing to acknowledge its role in one of the worst genocides in recent history.

In the 1970s, Mao wanted a client state in the developing world to match the Cold War influence of the United States and the Soviet Union. He found it in neighboring Cambodia. “To regard itself as rising power, China needed that type of accessory,” Andrew Mertha, author of “Brothers in Arms: China’s Aid to the Khmer Rouge, 1975-1979,” said in an interview.

China Is Urged to Confront Its Own History

Irritated Relations as a Reflection of the Global and Regional Politics

Initially, China might have come into contact with Cambodia in the context of Indochina. China‟s policy in Southeast Asia was to keep her southern neighbors in check and free from another challenging power. The Indochina Union was not only a geopolitical locality for theFrench colonization but also tacitly represented a block of Communist countries within whichVietnam was a team leader of the Indochina Communist Party. With a fear of the Soviet Union‟s influence in the region through a proxy of the Vietnamese
, China broke up the Indochinese Communist Party in the mid-
1950s in order to reduce Vietnam‟s domination in the block.

Cambodia-China Relations Based on the Mutually Beneficial Interests: China, the ‘Most Trusted Friend’ beyond Doubt