Since 1991, Cambodia has been desperate as this country is remained led 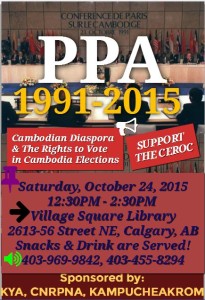 by the longest Premier Hun Sen whose leadership has focused on self-centred style than rule by law style. The Paris Peace Agreement has encouraged the Rule by Law leadership but this attempt has been disarrayed impregnably.

For this 24 years of PPA Anniversary, the CMN broadcasted the speech by Mr. Sophan Sent who was a keynote speaker during the gathering to commemorate the Paris Peace Agreement organized by Khmer Youth Association of Alberta (KYA).