Japan has spent huge money for Cambodia since 1991 to help build democracy and national institution of this country. Now, it is critical time that Japan will never give up in paralleling their efforts with the West and America to renew such endeavours. Now, time is for HS to pick a dark road or a bright road. (Quote from a facebook page) 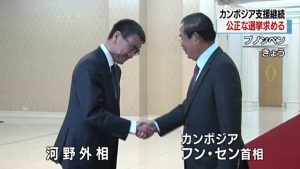 Kono and Hun Sen met on Sunday in Phnom Penh.

International observers have expressed concern about the fairness of the election scheduled for July. The Cambodian government forced the largest opposition party to disband last year.

Kono said the election should properly reflect the will of the people. He quoted Hun Sen as saying that it will be free and fair.

Kono told reporters that Japan is a longtime friend of Cambodia and doesn’t want to see the Southeast Asian country facing criticism.

He said Japan will keep monitoring the situation.