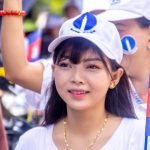 Observing the commune election of Cambodia this June 5, 2022, triggered many aspects of political pragmatism I have been advocating for. I wrote before on Sam Rainsy’s Exit and 3 Democratic Factoring to gauge sustainable democratization of Cambodia.

Now, through this several attractive speeches, Mr. Son Chhay articulates clearly on building political pragmatism to push against the odds of three poor targets by the dictatorship leaders in any society: 1. Making people hunger, 2. Making people fearful, and 3. Making people uncritical education. The debate and implementation success of the dictator originating in the embeddedness of people mindset of these 3 fallacies, and the ongoing divide and conquer chessboard through variety of tactics such as: spread rumours, dominating rumours media, threatening, and giving money as well as titles etc.

From this commune election, the maturity and well-informed citizens of Cambodia are visibly mushrooming and viable for closer engagement: reforming the National Election Committee and Judiciary System. The mature citizens are not sufficient without having strong teams of leadership, human resources, and fluid channelling funds.

When the NEC is central on people’s staring, the scenarios to push for actualization must be clear, strong, and achieveable: