The CPP loyalist’s guide to success 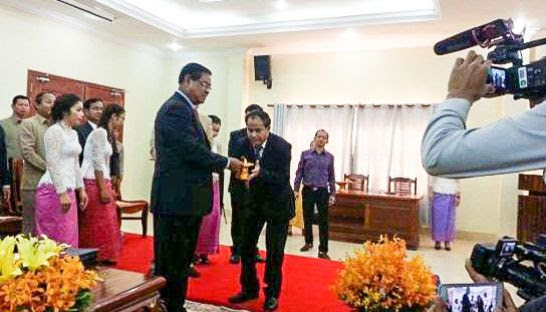 A little over nine months after his appointment as police chief of the coastal province, Kosal was ousted, “transferred to the ministry”, and appointed as deputy director of the tourism police department.

His fate is far from unique.

Government insiders and observers alike say that the Cambodian People’s Party, which built and maintains an iron grip on the state apparatus, has its own system for dealing with mistakes, be they real, perceived or political.

Those who displease their superiors publicly, or who fall out of favour privately, instead find themselves transferred to bureaucratic backwaters where, out of the limelight, they stay loyal and wait for redemption.

“The party always allows people to make mistakes, but the leadership, they take the opportunity to see how you respond,” said one long-time observer.

“They move you to an inactive post, and you learn how to watch and wait . . . as long as you don’t go to another party, go out and talk badly, or take revenge, you can be sure that at the right time, with the right envelopes to the right people, you will come back.”

Efforts by the Post to track down Kosal in recent weeks and establish the responsibilities of his new job, or whether he still held the job, proved difficult. His boss, head of the tourism police Som Siyan, said the former police chief was still employed as a deputy and “responsible for several provinces”.

Reached by phone yesterday, Kosal, however, said he was “retired” and hung up.

Kicking the wind, reading the newspaper

Two expressions are used to describe an official on the outs, a Ministry of Defence official recently told the Post. A person relegated to the blacklist is said to be “kicking the wind”, or “kicking the air” – both which mean unemployed – or he is said to be “reading the newspaper”.

“Working at the ministry [for them] is just like going to read the newspaper,” the source, who requested anonymity, explained. “You go to work but don’t do any work.”

Ministries have long been haunted by “ghost workers” – bureaucrats on the books but not at their desks. Within his department, the source estimated that just 20 percent of employees could be considered “active workers”.

He said that to rise in the Ministry of Defence, loyalty to the commander must be absolute. Visible shows of support and, in particular, raising funds for the boss to contribute to the party are the best way to secure a promotion.

Those who don’t show loyalty or who upset their superior are “blacklisted” – excluded from tasks and unable to rise.

Professional stagnation is not necessarily a bad thing, though, and can be particularly suitable for those with businesses or jobs on the side, he saidBut for those who have a genuine desire to work honestly, any spirit of public service is quickly crushed.

“There are only two options: be loyal to your commander and be promoted, or don’t and get frustrated,” he said. “A person who is hardworking and honest, the system changes them.”

Behind closed doors, said a consultant who works with the government and who has extensive knowledge of the party, three factors regulate an official’s conduct: their ability to do their job, contributions to the party and the influence of their patron. The latter he called “the most important”.

“You might not contribute a lot to the party, but you really make your boss rich,” the consultant said. “When you put these together, you can see why some incompetent people keep their jobs and others are kicked out easily.”

A Justice Ministry official told the Post simply being suspected of making a mistake – perhaps of supporting the opposition party – might see you ostracised, though not necessarily transferred.

“Sometimes they transfer you from one position to another, but sometimes he or she will be isolated from their area of responsibility,” said the anonymous official.

“They will be pushed out, and someone will replace them. They still have the position, but someone else does it for them. And then eventually he’s outside. It’s sort of like mental torture.”

Sebastian Strangio, author of Hun Sen’s Cambodia, says exiling officials to “patronage Siberia” is a way for the CPP to balance its obligations as a state and its stability as a party. It provides “effective discipline” but keeps officials “in the fold”, leaving the underlying patronage system intact.

“The entire party-state apparatus is made up of a complex mesh of personal dependencies, which gives Cambodian politics something of the quality of a game of Snakes and Ladders,” Strangio said.

“People can rise on a whim and fall on a suspicion. How far an individual falls is of course dependent on an ever-shifting equation of power among and between the top brass. No individual is ever entirely safe.”

Such was the lesson learned by Ty Sokhun when he was ousted as Forestry Administration director-general in 2010 amid criticism from Hun Sen for failing to stop illegal logging.

“Consider this a life lesson to try to work harder,” the premier at the time told the official, who has since been promoted to a secretary of state and yesterday hung up on a reporter.

Unsurprisingly, no mention was made of the 2007 Global Witness report that implicated the FA and members of Hun Sen’s family in a timber smuggling racket and accused Sokhun and then-minister for Agriculture Chan Sarun of selling more than 500 jobs within the body.

Sokhun’s fall, recalled veteran Cambodia-based environmental activist Marcus Hardtke, also bore a striking resemblance to Sarun’s own ousting from chief of the FA more than decade before, after which he climbed back up to become minister.