Beside of this manipulative GDP to increase wealth for the cadres, the elites and the powerful, the inability to collect domestic revenue, has been also factual to increase wealth for those bourgeoisie groups and ingrained corruption officials as well. Hence, the land concession policy, the Economic Zoning Policy, the privatization of state’s assets without fair bidding etc. all are part of injecting more wealth to those bourgeoisie groups.

But to what I called Cambodian people are cold-blooded consumers especially those are dwelling inside the cities and urban areas, are seem passively responding to state’s monopoly of infrastructure supplies such as Electricity, Water, Washes, and Garbage. Tell me how many company in Cambodia are running business to own Electricity or Garbage collection in Phnom Penh (without elaborating entire Cambodia) to value the choice of consumers as well as to structuring the competitiveness in order to gaining productive services and minimized cost? None.

As an example, a house is contracting with only one Electricity company. More the house is using the electricity, more value added cost incurred into their usage. When the house paid late few days, the service provider come to the house and unplug the electricity motor without hesitation. Those agents and services providers sometime are bribed by the house owner to accommodate ease for the need of the light. This is just one of the examples of facade democracy but operating dictatorship marketing system in case just this electricity provision.

Those Cambodian consumers are pointless in this situation. Who could shed some light for them to wake up?

Cambodia political economy can be one of the impressive subjects for university students who have enrolled in Political Science, or MBA etc. From the past to present, Political Economy has transformed into real alternative for political liberalism among post-Marxism scholars. But this article, the author is aiming to elaborate on how Cambodia politics in general has applied political economy into its governance and public administration?

History of Political Economy
I don’t know much about the birth of Political Economy. But according to some texts, the Political Economy has been a classic subject during the heyday of Adam Smith, David Ricardo and many others. Some school of thought such asWilliam Jevons and Afred Marshall keyly focused on productive factors of land, labor and capital to distance itself away from the Politics, or this thought is called “Neoclassical Paradigm”.

During the early 19th century, the conservatives and the Marxists were at their height to debating on the creating of science of society. But at the twentieth century, many subjects were closer to its points ie feminist, ecology, and moral economy etc. This group of post-Edmund Burke and Neo-Marxists likely jumped over the neo-classical orthodoxy towards Political Economy.

And I have noted that modern perspectives are expanding towards all types of periphery ie Politics of Ecology, The Indigenous Politics, The Politics of Diaspora etc. 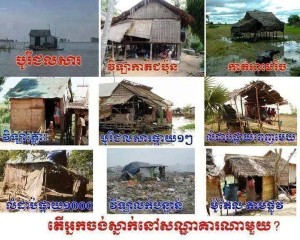 After the peacekeeping effort and election monitoring by the United Nations in 1993, Cambodia has obtained political package of democratization, strengthening the rule of laws, and liberalize its economic development. While the world has been so indulgent into Economy than Politics and Others, Cambodia has well adapted itself to this new trend.
END_OF_DOCUMENT_TOKEN_TO_BE_REPLACED