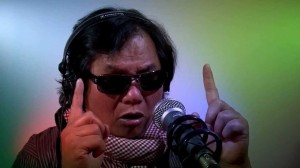 
« NEC in Cambodia is incapable
Policy Watch by Sophoan: Economy Policy of the CNRP addressed by H.E.Kem Sokha »