Ms. Sorn Sievmey: the modern heroine of Cambodia in a controversial context

Her first speech after championing gold medal of Taekwondo match from her rival in Asian Games 2014 at South Korea, Sievmey proudly said:“First of all, I would like to thank my mom who gave me life, who breastfed and raised me, and who has encouraged me all the time….” Her brilliant and vivid words are reflecting tough stature of Khmer women, and one of them is her mom who is a widow after her husband died several years leaving 6 children as a family burden for her to bear with. In Cambodian society, and like many other societies, children are taken care by mother; but the most challenging motherhood in Cambodia is there are many single-moms who must take care many children by her own responsibility without having support or subsidy from the government. Ms. Seavmey is her last daughter among those six children. She is only 18 years old. She failed the first BAC II exam this year, while she is busy in training to bring back both personal achievement and national fame, her second exam laid out by the Ministry of Education might be possibly unsuccessful. However, the prospect to give her BAC II pass for free from the Ministry is feasible and indisputable. 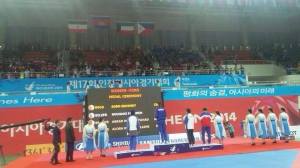 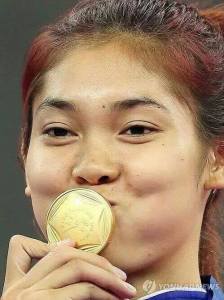 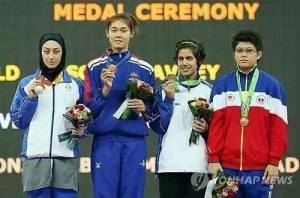 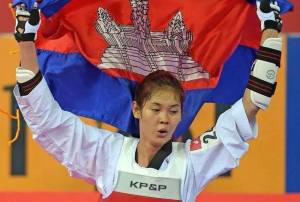 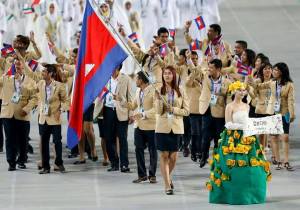 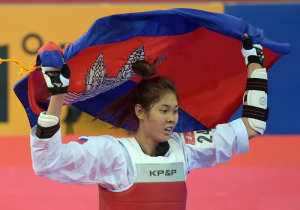 Ms. Sorn Chanty who is Siev Mey’s mother is very proud of her daughter’s achievement. In the news interview, she suddenly exclaimed that her daughter is bringing fame for the Cambodian people. Ms. Sievmey, who was trained out of the Olympic Stadium under South Korean coach Choi Yong-Sok, beat fighters from Uzbekistan, the Philippines and Iran to take the women’s under-73kg gold.

The national heroine of gold medalist Siev Mey landed home with the warmest welcome from Khmer compatriots. She is greeted in person by the Minister of Sport and Education, and the Minister of Tourism. Ms. Sorn Siev Mey must be supported by both short term and long term plan. Many thousands dollars shall be handed to her from personal pocket of Khmer millionaires including the Prime Minister Hun Sen. This action is considered a short term welcoming. At a long term support and modeling, the Cambodian Assembly through Commission for Women Affairs and Labors etc. led by Mrs. Ke Sovannaroath, must set up an agenda to approve for her status of at lease Special National Ambassador for Sport and Education of Cambodia with salary and recognition of not lower than Secretary of State. This action would encourage and empower the merit-based culture in Cambodian society.

Ms. Sorn Siev Mey has involved in many sport matches in both national and international arenas. Currently, she is possessing 7 medals of three gold medals, three copper medals, and one silver medal. In the future, she must be a national icon. The responsible government must be able to allow her to using her own potential at the highest such as to instruct and lead millions of Cambodian youths with genuine prize of merit.