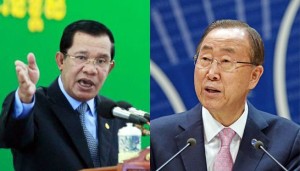 Last week, Va Kim Hong, the senior official in charge of border affairs, presented a number of maps used in the ongoing demarcation, stating that although developed in concert with Vietnam following a 2005 border treaty, the maps match those held by the UN.

Welcoming the prime minister’s request, CNRP lawmaker Um Sam An, among those involved in the June brawl, said the government should verify its maps and the placement of border posts together with the opposition, civil society and experts.

“If [we] verify and see that the posts are planted inside Khmer land, [we] must review and re-plant [border posts],” Sam An said.

Sam An also revealed the opposition would invite Cambodian People’s Party lawmakers to join a group of 10,000 people visiting border markers 202 and 203 in Svay Rieng’s Kampong Ro district on July 19.

The site has been a source of tension. On Saturday, a local NGO leader was detained and allegedly beaten by Vietnamese authorities after leading a group of students there.

The same area was the location of the June brawl between an opposition-led group and Vietnamese authorities, prompting a fierce rebuke from Vietnam, which will form a joint committee with Cambodia to investigate the violence.

Sam An said he would forewarn provincial authorities of the July 19 trip.

But Council of Ministers spokesman Phay Siphan yesterday said the planned march had the potential to end in violence and the government will take steps to see that it doesn’t take place.

“The government would negotiate to avoid this march happening along the border; it is provocative and eventually there will be violence,” he said.

Asked about the march yesterday, CNRP president Sam Rainsy was more equivocal than his lieutenant, saying that he had told Sam An to “calm down”, saying the party would “wait and see” the outcome of Hun Sen’s request.

However, he didn’t rule out a mass rally “if it’s the will of the people”.