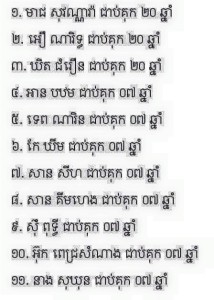 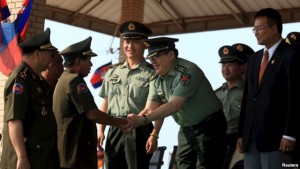 PHNOM PENH, CAMBODIA—Cambodia is strengthening its military ties with China, and analysts say it is likely to continue doing so for the forseeable future.

In a recent interview, he told the VOA Khmer service that the visit was successful in bringing military cooperation between the countries even closer. That relationship is closer than Cambodia’s military ties with the U.S., he said.

Analysts say Phnom Penh is likely to look more and more to Beijing for support because of growing tensions with its old patron, Vietnam, over border issues.

Cambodia and China have traditionally enjoyed close relations, and they became noticeably closer after 2012 when Cambodia, as host of an Association of Southeast Asian Nations summit, sided with China over the contentious South China Sea issue.

Cambodian Prime Minister Hun Sen has often touted the relationship. During the inauguration of a Chinese-funded road in Kampong Som province last month, he told a group of farmers that Cambodian-Chinese relations were at an all-time high, and that the two were moving toward a “comprehensive” partnership. China’s development fund for Cambodia for 2015 amounted to $140 million, up from $100 million the year before, he said.

Tea Banh defended the bilateral relationship, saying Chinese aid came with no strings attached and that China had never interfered in Cambodian affairs. He declined to disclose how much aid Cambodia would receive from his latest trip.

Yet analysts warn that China is getting more out of the deal than Cambodia. Chheang Vannarith, a visiting professor at the University of Leeds in England, said China needs Cambodia as a partner in Southeast Asia, where competition is rising.