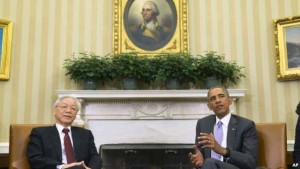 Sanchez also joined eight other representatives including Rep. Chris Smith, R-N.J., in an open letter voicing concerns about the meeting.

They noted Vietnam is a signatory of the International Covenant on Civil and Political Rights and a U.N. protocol against torture despite numerous human rights violations. The United Nations Working Group on Arbitrary Detention has concluded that Vietnam systematically arrests Vietnamese reform activists.

In their letter, the lawmakers explicitly asked for the release of nine political prisoners.

“As you well know, Mr. Trong is not a head of state nor leader of an elected government. He has been invited to the White House simply because he sits at the top of Vietnam’s one party system,” they wrote. “The authoritarian one-party system is the root cause of the deplorable human rights situation in Vietnam.”

Even as Obama and Trong emphasized areas of cooperation Tuesday, the U.S. president did say they spoke candidly about human rights and religious freedom in Vietnam.

Trong also said he extended an invitation for Obama to visit Vietnam and the president had accepted. While Obama noted the invitation, he made no specific commitments to travel to Vietnam during his presidency.

The United States and Vietnam resumed diplomatic relations 20 years ago. Experts say the administration’s Asia policy is largely formed around Vietnam because the country is resistant to China expanding into the South China Sea. As a result, Vietnam would side with the U.S. in standing against China

The Associated Press contributed to this report.