Arguing towards this research finding by Asia Foundation resonates different aspects. While the finding is very crucial for policy maker(s) to determine their policy platform, the finding doesn’t help much in crafting “institution” but it has helped a lot regarding public opinion for political parties. This research (survey) couldn’t avoid from bias and deviation within the nature of population sampling, technicality, and methodology. In a nation-state of democratic principles that consists of two-ways communication: state-people and people-state, this research is purely focusing on people-state channel, thus it is hard to comprehend the effective approach in “capacity building on state-institution”.

I am keep to articulate more in “state-institution” building which importantly relies on the equity of the state-approached and people-approached participation. It is nice to read the lacking of trust of Cambodian people towards the institution with many clauses of recommendation to bringing about trust from the people. But it is a jargon to read lengthy description on people’s bad mentality towards institutional corruption without having people’s self-responsiveness to discourage corruption, for instance “no bribe, no corruption” etc.

Cambodia is lacking nation founding father. Cambodia is fulfilled personal-cult founding fathers. By evidence, founding father have projected long term interest for the nation such as paving strong foundation for Cambodia as a nation-state to having strong institution accounting from neutral media to educate the public, to political parties system of sound balanced government party leadership and opposition party leadership, to building trust in between state and society etc. Now, government leadership party can enjoy all the provisions in term of party’s base of people-networking, media and financial injection, the opposition party is non-available at all in term of state’s funding while the party has wholly relied on generosity and donation in kind from the members. This kind of political system is not existing in civilized democratic countries. And this culture of non-equity political system shall not sustain Cambodia in its long term democratic system at all.

To recap, I copied and pasted the key ideas in here for everyone to digest more. The research is shedding light towards political parties, academia and news outlets. It is hugely benefiting those “think tank” to think about embodying themselves to be “nation founding father”, or at least “to avail themselves for critical thinking” through word of mouth, facebook, blog, workshop, writing to the editor, or other simple sharing etc. 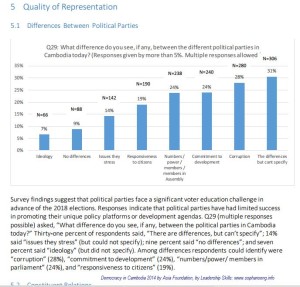 …the majority of respondents in the 2014 survey said the country is headed in the wrong direction.

As Cambodians’ economic aspirations have increased, the survey finds that citizens’ ability to function within a democracy has significantly improved in the last ten years. For example, virtually all respondents believe that it is okay to take money from political parties but vote for the party they like…However, the survey found general societal trust to be almost non-existent in Cambodia – a startling finding worthy of further investigation. While trust in government institutions was very low, trust appeared to improve significantly with proximity. About half of respondents said people in their neighborhoods are trustworthy.

…In support of these findings, almost half of all respondents hold the view that local government decisions affect their lives more than decisions of the national government…

…Unsurprisingly, the majority of respondents (particularly youth) still hold the view of the relationship between government and citizen as being one of parent to child versus a relationship of equals.

…For political parties, first, given that corruption is perceived as the biggest problem facing Cambodia, party platforms with a strong counter-corruption commitment will broadly appeal to the electorate’s desire for change. Second, it is clear that the public favors political decentralization, with very large majorities favor directly elected versus indirectly officials at all levels. Although it is understandable that political parties would prefer to retain control over the selection of officials, there is a huge potential electoral payoff for any party willing to embrace political and fiscal decentralization. Third, although vote buying or gift giving may still be an effective strategy for getting out a party’s own supporters, it is clear that in Cambodia it is not effective in changing how voters choose to vote. Parties that wish to attract new voters would be better off spending their resources to develop and publicize programs attractive to the electorate at large.

…However, trust in state institutions is very low. Therefore, as a priority, the government should improve access to information and build open, two-way channels of communications with the public. For example, regular meetings with the public at the commune and district level is a promising 6 channel to build trust, yet such engagement requires active listening and follow up on the part of the government and citizen…

…For over a decade, international and local citizen observers have been critical of Cambodia’s electoral process, in particular election administration, voter registration, media coverage, the use of state resources, and the role of the security forces.

Understanding of the meaning of democracy is weak. Many have a paternalistic view of the role of government, and most perceive democracy as associated with rights or freedoms rather than self-government…