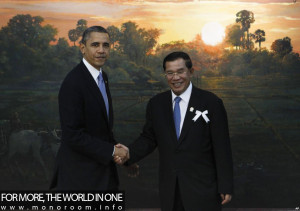 “Cambodia has changed from a planned economy to a market economy through its own reforms,” he said. “I urge all foreigners to respect and understand Cambodia.”

The US ambassador’s statements have provoked the ire of Hun Sen’s ruling Cambodian People’s Party in the past.

In May, the Foreign Ministry called Todd “insolent” for a blog post he wrote asking the government to review a bevy of laws on NGOs, trade unions and online speech, while the US Embassy was slammed by the government in July for expressing “deep concern” over the arrest of 11 opposition activists, including one US citizen.

During his speech on Saturday, Hun Sen said he did not want to admonish Todd, although he hoped the new US ambassador would be more “aware” of Cambodian political realities than Todd.

Hun Sen and Todd met on August 11 at the Peace Palace in Phnom Penh prior to the ambassador’s departure.

William Heidt was confirmed as the new ambassador to Cambodia on August 5 in Washington, although he has yet to arrive in the Kingdom.

Responding to the premier’s comments, opposition Cambodia National Rescue Party spokesman Ou Chanrith said change could happen peacefully if carried out by free and fair elections rather than toppling governments, adding that Cambodia had nothing to teach the West about governance.

“It’s laughable,” he said. “[Westerners] have been in democratic countries for years, and have practised this successfully while we have just learned about it.”

“I don’t know what we can teach them; I think they understand democracy better than us.”

Hun Sen has often tied the relative stability of Cambodia in recent decades to his party’s tight grip on power, warning of a reappearance of civil war were his party to lose.

In a speech in January, he also compared the religious extremists of the Islamic State to Pol Pot, the leader of the Khmer Rouge regime – in which Hun Sen served as a military commander.

However, political analyst Ou Virak said that countries that have especially long-serving leaders, while establishing some measure of stability, often create their own problems.

“We have not yet resolved our national problems,” he said.