The lie behind GDP: Why four in five Cambodians are missing out 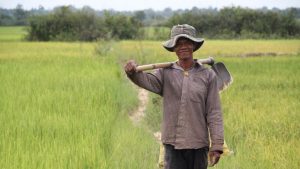 Rural Cambodians make up almost 80% of the population but, unlike their fellow countrymen in the cities, are held back with poor or limited public services and a lack of transparency in government policies.

Cambodia is one of the fastest expanding economies in the world. It has been growing at 7% or more each year since 2004, largely driven by agricultural development and has seen per-capita income rises, life expectancy increases, and its highest-ever literacy rate. This rapid economic growth has lifted five million people out of poverty, many of which are joining 21% of the country’s 15 million citizens by migrating to its capital city for better opportunities.

And the country is proud of its achievements, particularly in achieving the global Millennium Development Goal (MDG) of halving poverty. Its rate of improvement in this has been dramatic, falling from 53% in 2004 to 17.7% in 2012.

A reduction in poverty rates is not the whole story

“The loss of just 1,200 riels (30 US cents) per day in income would throw an estimated three million Cambodians – 20% of the population – back into poverty, doubling the poverty rate to 40%,” explains Neak Samsen, a poverty analyst with the World Bank in Cambodia.

At the same time, Cambodia is also a country of rising inequality. While the capital city is transforming into a city filled with high-rise luxury apartments, imported cars, and western-style shopping malls, rural areas continue to be left out. Poverty is highly-concentrated in these areas, affecting 79% of citizens. These people are mostly subsistence farmers, members of poor fishing communities, landless people, displaced persons, and mine victims.

Because they live in remote villages these groups are isolated from basic social services, education and facilities – and some have to walk more than five km to the nearest road. In other words, the economic transformation has resulted in a stark rural-urban divide that continues to widen as Cambodia moves forward. In 2004, the gap was 89%, but in 2011, it widened to 91%.

Land ownership is a contentious issue

Adding to these problems is the issue of land ownership. Conflict between the government and farmers is common in Cambodia and dates back to the Khmer Rouge regime when most land records were destroyed during the 1975 genocide. As a result, many rural farmers are unable to prove their rightful ownership of the land.

But more serious is the lack of transparency in deals between government and investors that result in the large-scale displacement of the population. As just one example, farmer Phao Nheung from rural Chi Khor Krom commune had her rice field ploughed without her knowledge. Residents from the community said they were not told of the details of the deal signed between the government and investors. “We lost everything. Now we do not have enough to eat,” Nheung, 40, told the Thomson Reuters Foundation.

Reform and transparency is needed

Nheung, one of 770,000 victims of the lack of governmental transparency, is now left with just one of her five hectares of land. To tackle this important issue in the future, land contracts must be disclosed to residents so the right people can be found accountable and residents have more leverage to assert their rights. Without this powerful information, farmers and residents are left under-compensated or treated unfairly.

But this is not always the case. Tek Vannara, director of the NGO Forum on Cambodia, told the Thomson Reuters Foundation that the government had begun publishing details of contracts and location of land concessions online, but has stopped doing so since 2009. This practice should be urgently brought back.

This lack of transparency gives rise to a vicious cycle of poverty in rural areas, made worse by other long-standing barriers that stifle productivity, such as bottlenecks in fertiliser and seed markets, inadequate irrigation systems, a lack of savings and poor access to credit. As a result, small-scale farmers are vulnerable to fluctuations in international rice prices and tourism is becoming an attractive source of revenue.

But the commercialisation of the countryside does not help to alleviate poverty in the way it is meant to. Instead, it reinforces it. Villagers in the often-visited areas are under pressure to stay “primitive and poor” to retain authenticity and continue attracting tourists. As a result, many villagers are inclined to improve their life only marginally to continue capitalising on this lucrative business.

A lack of infrastructure limits opportunities

To make things worse, these communities also suffer from a lack of public infrastructure and services like healthcare and sanitation. This leaves a third of children under five years old stunted, and more than 80% of Cambodians awaiting access to a piped water supply. Meanwhile, hospitals and public schools accessible to the poor are often understaffed and underequipped. Proper roads are also in short supply, meaning farmers have difficulty sending their goods to the market, and children struggle to get to classes.

To fully understand the problem it must also be understood that rural poverty is in large part perpetuated by rampant corruption. According to the 2015 Corruption Perception Index (CPI), Cambodia ranks 150 out of 168 countries regarding graft, with a score of 21 out of 100. This tends to result in unbalanced development, with rural areas at the shorter end of the stick.

Corruption is a key contributing factor

Despite the ranking, the truth is the Cambodian government is actively trying to curb corruption, passing an Anti-Corruption Law in 2010 which stipulates that any official found guilty of corruption can face up to 15 years of imprisonment and harsh penalties. However, the CPI 2015 also shows that there is a lack of strong and effective mechanisms to fight corruption.  Nepotism and conflicts of interest are widespread, and as such, regardless of the anti-corruption laws present, corruption will be perpetuated.

Large finance streams have recently been secured by the Cambodian government which should begin to make a difference, including a US$40 million loan and US$600,000 of technical assistance to help strengthen the financial sector. Along with a US$130 million funding package from the World Bank these streams of development cash will focus on poverty reduction and improving the lives of vulnerable people.

The government also appears to be dedicated to promoting inclusive growth and narrowing the inequality gap via its “one province, one university” plan where students would no longer need to bear the higher cost of transport and living expenses for them to study. This is intended to improve enrolment rates for the rural poor.

Cambodia is undergoing a transformation, but these improvements to citizens’ quality of life are neither even, nor fair. Rural areas, alongside the garment industry, have been driving Cambodia’s remarkable growth but are not seeing the benefits.

Years of prudent policy-making may be paying off economically, but now the same attention must be turned to the needs of the many people living outside of large cities. They are working hard to grow their country’s opportunities; it must work harder for them.

Spread the love
Posted in Economics, Researches | Comments Off on The lie behind GDP: Why four in five Cambodians are missing out