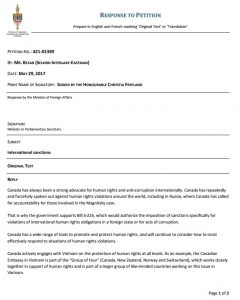 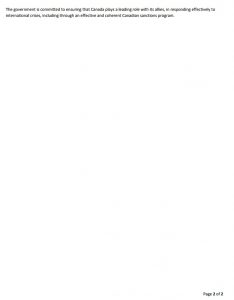 Canada has a wide range of tools to promote and protect human rights, and will continue to consider how to most effectively respond to situations of human rights violations.
Canada actively engages with Vietnam on the protection of human rights at all levels. As an example, the Canadian Embassy in Vietnam is part of the “Group of Four” (Canada, New Zealand, Norway and Switzerland), which works closely together in support of human rights and is part of a larger group of like-minded countries working on this issue in Vietnam.
The government is committed to ensuring that Canada plays a leading role with its allies, in responding effectively to international crises, including through an effective and coherent Canadian sanctions program.
Original reference: Parliament of Canada and Reply from the Government in Approval
Spread the love
Posted in Economics, Education, Environment, Leadership, Politics, Researches, Social | Comments Off on Cambodia is in need of this Sergei Magnitsky Law to Responding Current Political Setback
Tags: Magnitsky case