PHNOM PENH (Reuters) – Sweden said on Thursday it would rethink its engagement with Cambodia if the main opposition party is dissolved, in the strongest warning yet from a Western aid donor. 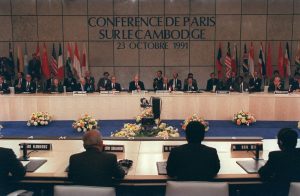 The government has filed a suit to dissolve the Cambodia National Rescue Party (CNRP) after charging its leader, Kem Sokha, with treason. He rejected the charge as politically motivated.

Excluding the opposition party would allow veteran Prime Minister Hun Sen a clear field to extend his 32-year rule at the next election in 2018.

Swedish Human Rights Ambassador Annika Ben David told a news conference at the end of a five-day visit the banning of the opposition party could have consequences.

“Should the Cambodia National Rescue Party be dissolved, this will force my government to rethink our engagement Cambodia,” she said.

Other Western countries have condemned the arrest of Kem Sokha and warned against dissolving the CNRP, but have not raised the possibility of action.

David did not elaborate on what Sweden might do.

“This is language that the royal government can’t accept,” Phay Siphan told Reuters. “This is an invasion and insult to the Cambodian national institution.”

Sweden had given Cambodia an estimated $100 million in aid over five years, David said. According to Cambodia’s database of donors, Sweden ranked third for aid among individual EU member states last year after France and Germany.

This week, parliament changed the law so that the CNRP’s seats can be shared amongst other parties if it is dissolved.

While Western governments have for years tried to put pressure on Cambodia over the stifling of democracy and the trampling of human rights, China has become an increasingly important ally and business partner.