In this era, Ministry of Foreign Affairs is very essential agent to prevent all actions of their government. In the same time, one of the mechanisms for opposition party that has been dissolved by the Cambodia’s People Party must use the international mechanisms effectively. Therefore, how could the opposition implement? 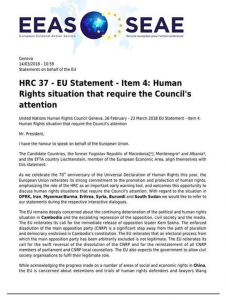 I have the honour to speak on behalf of the European Union.

The Candidate Countries, the former Yugoslav Republic of Macedonia[*], Montenegro* and Albania*, and the EFTA country Liechtenstein, member of the European Economic Area, align themselves with this statement.

As we celebrate the 70th anniversary of the Universal Declaration of Human Rights this year, the European Union reiterates its strong commitment to the promotion and protection of human rights, emphasizing the role of the HRC as an important early warning tool, and welcomes this opportunity to discuss human rights situations that require the Council’s attention. With regard to the situation in DPRK, Iran, Myanmar/Burma, Eritrea, Syria, Burundi and South Sudan we would like to refer to our statements during the respective interactive dialogues.

The EU remains deeply concerned about the continuing deterioration of the political and human rights situation in Cambodia and the escalating repression of the opposition, civil society and the media. The EU reiterates its call for the immediate release of opposition leader Kem Sokha. The enforced dissolution of the main opposition party (CNRP) is a significant step away from the path of pluralism and democracy enshrined in Cambodia’s constitution. The EU reiterates that an electoral process from which the main opposition party has been arbitrarily excluded is not legitimate. The EU reiterates its call for the swift reversal of the dissolution of the CNRP and for the reinstatement of all CNRP members of parliament and CNRP local counsellors. The EU also expects the government to allow civil society organisations to fulfil their legitimate role. 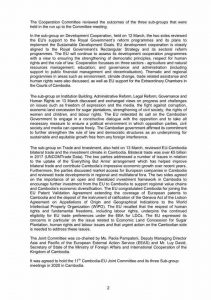 While acknowledging the progress made on a number of areas of social and economic rights in China, the EU is concerned about detentions and trials of human rights defenders and lawyers Wang Quanzhang, Li Yuhan, Huang Qi, Yu Wensheng, Wu Gan and Tashi Wangchuk. The EU urges China to release all detained human rights defenders and to thoroughly investigate reported cases of mistreatment and torture while in detention. The EU is also concerned about the continued detention of the Swedish citizen Gui Minhai. The EU demands that he be allowed to meet Swedish diplomatic and medical staff and that he be released. The EU calls upon China to respect the rights of freedom of expression offline and online, and of religion, as well as cultural diversity, not least in Tibet and Xinjiang.

The EU remains deeply concerned about the high number of killings associated with the campaign against illegal drugs in the Philippines. The EU emphasizes the importance of carrying out the campaign with a focus on public health and in full compliance with due process, national law and international human rights law. It is imperative to conduct prompt, effective, impartial and transparent investigations of all cases of death leading to prosecution in all cases of unlawful killing.

On Venezuela, the EU is seriously concerned about the continued weakening of and non-respect for democratic institutions, the repression of political opponents and the obstacles to the opposition’s equal participation in elections. The adoption by the constituent assembly (not recognized 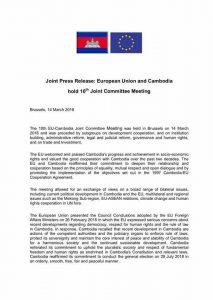 by the EU and other international partners) of the “Law against Hatred” risks  further restricting the freedom of expression and opinion. The EU is also concerned about persistent  arbitrary detentions, reports of extrajudicial killings and widespread violations of the rights to food and to healthcare. The EU calls on the Venezuelan government to uphold people’s fundamental rights and freedoms, to facilitate external assistance to meet the pressing needs of the population, to release political prisoners, to respect democratic institutions and to ensure that elections are constitutional, transparent, credible and inclusive.

The EU recognizes Egypt’s efforts to combat terrorism and recalls the need to tackle it in full respect of international human rights standards and fundamental freedoms.  The EU continues to call on Egypt to respect rights to freedom of opinion and expression offline and online, including for journalists and bloggers, and of freedom of assembly and association and to stop applying disproportionate legislation limiting them and unduly restricting space for civil society organisations. The EU calls on Egypt to continue their efforts to shed light on the circumstances of the death of the Italian citizen Giulio Regeni and the French citizen Eric Lang and bring about justice. The EU is concerned about the recent increase in death sentences and executions in Egypt and calls on Egypt to suspend the issuance and implementation of the death penalty.