Adding to this Act, please watch additional analysis and other related election news through youtube

Chairman Royce submitted the following remarks for the record: 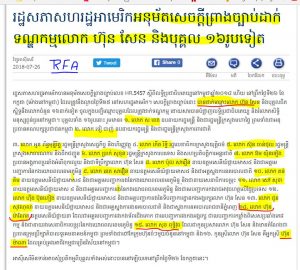 “Thank you, Mr. Speaker, for bringing this important and timely legislation to the House Floor.

I want to begin by thanking Rep. Yoho, the Chairman of the Asia and Pacific Subcommittee, for authoring this bill, which is the product of his important oversight work. I would also like to recognize Rep. Alan Lowenthal for his tireless advocacy for this bill, as well as Ranking Members Engel and Sherman for their strong support.

In four days, Cambodians will vote for a new head of government. Unfortunately, this election will not be legitimate in any way. Hun Sen and his thugs long ago decided the outcome, by marginalizing, beating and imprisoning members of the opposition.

Since Cambodia’s deeply flawed elections in 2013, we have seen intensifying attacks on Cambodians peacefully opposing their government. Hun Sen’s thuggish regime continues to crack down on political opposition and other activists who oppose his rule. Freedom House consistently rates Cambodia as ‘Not Free,’ noting harassment of the regime’s political opposition.

That’s putting it mildly. Three years ago, opposition lawmaker and American citizen Nhay Chamreoun was severely and brutally attacked by plainclothes bodyguards, who repeatedly kicked and stomped him. He was hospitalized for months. Several months later, Kem Ley, a popular Cambodian political commentator, was murdered in broad daylight for his outspoken protests of the regime.

Over the last year, Hun Sen has dispatched any notions of democracy in Cambodia. He dissolved the opposition party, CNRP, arrested its leader Kem Sokha – who now faces spurious treason charges – and completely dismembered the political system in Cambodia.

Importantly, the Cambodia Democracy Act of 2018 imposes sanctions on all members of Hun Sen’s inner circle for their role in undermining democracy in Cambodia and committing serious human rights violations. Specifically, it bars these individuals from entering the U.S. and blocks any assets or property they may possess.

It will be up to the president to determine who should be designated for these sanctions. But given the brashness of this regime, we do have a good idea of who the president should target:

Again, thank you Mr. Speaker for bringing up this very important and timely legislation. The people of Cambodia deserve far better than the Hun Sen’s despotism. Political pluralism will soon reach Cambodia, and this legislation will not only help Cambodians attain that goal, but will also send a strong signal that Congress will not tolerate these human rights abuses.”


« Hun Sen has become staunch puppet of both China and Vietnam
Sovantha and Rozeth: Two opposite sides of the same Cambodian coinNew Content Item »