RESOLUTION
Of the CNRP Overseas World Conference
in the City of Atlanta, Georgia
1-2 December 2018 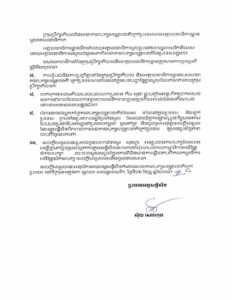 The governing council of Cambodia National Rescue Party overseas shall have a Secretariat General.

The composition of the Governing Council and the Secretariats are selected among women and the youth.

This Resolution is approved by the Conference presented by chapters delegates of Cambodia National Rescue Party Overseas worldwide in the city of Atlanta, Georgia on December 2nd, 2018

Chair of the Conference

Video clips of support from the grassroots leadership through out Cambodia: Part 1 & Part 2